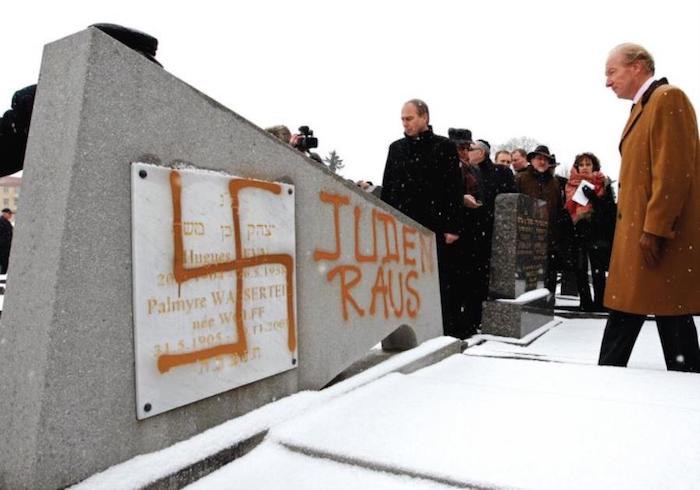 A poll conducted by jewish-owned CNN predictably found that over one-third of Europeans believe that Jews have too much influence over their societies:

A new poll by CNN has demonstrated a worryingly high prevalence of antisemitic attitudes around Europe, with significant percentages of people believing that Jews are too influential in politics and media.

The results from from a comprehensive poll conducted by CNN/ComRes, which sampled 7,000 Europeans from Austria, France, Germany, Great Britain, Hungary, Poland and Sweden.

According to the poll, only one in ten people surveyed said that had an unfavorable attitude toward Jews, although that figure rose to 15% in Poland and 19% in Hungary.

According to the poll, approximately one third of those surveyed said Jews were too influential in political affairs around the world, and more than a quarter of Poles and Hungarians said they had too much influence on the media.

A third of Austrians said Jews have too much influence over finance, along with a quarter of all French and Germans who were polled.

At the same time, almost a fifth of Europeans, some 18%, blame antisemitism in their countries on the behavior of Jews, while a third of Europeans believe that Jews use the Holocaust to advance their own positions or goals.

A third of those surveyed said that Israel uses the Holocaust to justify its actions, with 50% of Polish respondents agreeing, and only a fifth disagreeing.

And a third of Europeans said supporters of Israel use accusations of antisemitism to shut down criticism of Israel, while only one in 10 said that was not true.

Nevertheless, two-thirds of Europeans said that commemorating the Holocaust helps ensure that such atrocities will never happen again, and half said it helps combat antisemitism.

Jewish Agency Chairman Isaac Herzog said in response to the survey that governments need to do more to combat antisemitism, in particular by including Holocaust studies as part of the school curriculum across Europe.

“Antisemitism is one of the oldest diseases – racism being another such disease – for which there is no vaccine,” said Herzog.

“This disease must be fought before it spreads, and becomes a pandemic. History teaches that if antisemitism isn’t dealt with at an early stage, it will threaten people’s lives, as we saw in Pittsburgh. I call upon the enlightened leaders of the world to take the gloves off, and work immediately and strongly against the worrying signs of antisemitism that can be seen in various countries.”

When the goyim believe that Jews have too much influence, they are “antisemitic,” but when a jewish professor from Princeton University such as Benjamin Ginsberg in his book “The Fatal Embrace” makes the same claims, the Jews don’t, of course, attack him as an antisemite.  If the goyim dare to quote Professor Ginsberg’s book on jewish influence in our society, they will be smeared as antisemites.  If the goyim even know about Ginsberg’s book, they are probably antisemites.  That’s how the game is played, and if you don’t like it, you’re an antisemite.