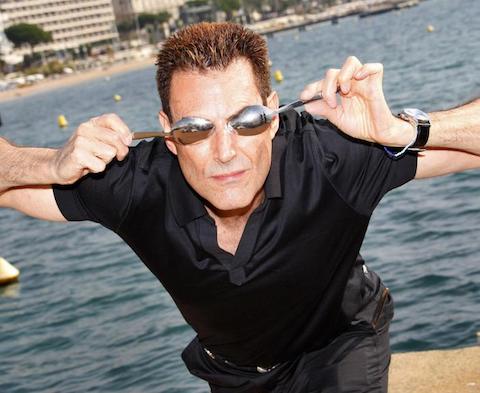 The Israeli Jew and flim flam man, Uri Geller became wealthy by convincing the goyim that he could bend spoons with his psychic powers, and now he’s promising to use those same powers to block antisemites like Jeremy Corbyn from getting elected in England:

The Israeli-born psychic, who lives in a mansion in Berkshire, was speaking on a panel with Roseanne Barr, at an event chaired by American rabbi, Shmuley Boteach.

In answer to a question about the Labour Party leader, Mr Geller told the Jerusalem audience: “I have no problem in saying he is an antisemite.

“God forbid if he takes control.”

Mr Geller was asked by Rabbi Boteach if he thought it would damage his celebrity status if he spoke out by calling Mr Corbyn an antisemite.

Mr Geller said: “I have charisma, if I said it, I would say it in the right way. I would have to say it live on TV in Britain and feel the Jewish people looking at me.”

Mr Geller, who was once the subject of a documentary that claimed he used his telepathic and psychic powers in a number of key CIA operations during the Cold War, said he would make sure Mr Corbyn never became prime minister.

“With all my telepathic powers I am not going to let that happen,” he said.

Ms Barr, whose sitcom Roseanne was revived last year but then cancelled after she tweeted apparently racist comments about an African-American member of the Obama administration, said she would support Mr Geller with “telepathic powers too.”

Mr Geller also re-told the story about how he met Theresa May in 2014 and predicted she would become prime minster.

He said Mrs May came to meet him and he showed her his Cadillac covered in spoons, some of which were owned, used or touched by famous personalities.

He said: “I told her to touch Winston Churchill’s spoon. I told her she was going to be prime minister and she laughed.

“It is important that she stays in power because god forbid Corbyn should take her place.”

Jews have always fantasized about having “super powers,” perhaps going back in history to when the Jews of Prague tried to summon up their Golem, a Frankenstein-like creature, to fight against their goy enemies.  This jewish tradition eventually morphed into Jews creating comic book “super heroes” in the 20th century to fight their “fascist” enemies.  One thing is certain, though: no matter what century we are talking about, Jews always seem to have had mortal enemies.

If Uri Geller’s psychic abilities to fight “antisemites” is truly effective, why does he concentrate only on thwarting Corbyn’s political future?  Why not use those psychic powers to stop all “antisemites” everywhere in the world?  If Geller can bend spoons with his mind, he can surely bend antisemites into submitting to his will.  Surely, he can use those powers to wipe out all doubt that people have about the official Holocaust narrative.  Or get Palestinians to stop throwing rocks at Israeli tanks?  Geller has a lot of work ahead of him if he wants to eradicate “antisemitism”.