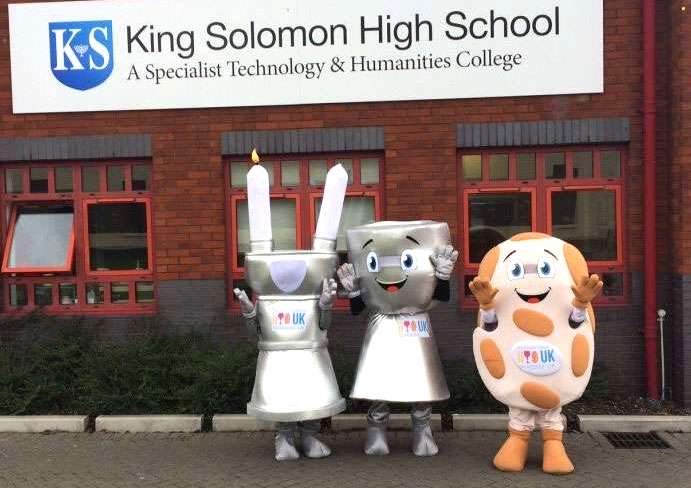 Jewish students are being picked on, mugged, and allegedly beaten by Muslims and Blacks at Kantor King Solomon High School in Ilford, Essex, an “inclusive” jewish school which takes pride in its “diversity”:

King Solomon also announced on Monday that it will introduce random weapon checks at the school gates in the coming weeks, although it denied it had “specific concerns that our students are bringing weapons into school”.

It comes at a time when Jewish schools across London are struggling to deal with a spate of violent incidents. Rachel Fink, the JFS headteacher, wrote twice to parents this week to inform them of an “increasing number of muggings and attempted muggings” in the area between the school and the nearest underground station.

Citing a “significant shortfall in the costs of providing security”, Mrs Fink appealed for parents with CST training to assist members of staff in supervising the area before and after school.

One JFS sixth form student told the JC he “would be lying if I said I felt comfortable walking around Kingsbury”, while a father said: “Since my kids have been going there we’ve used smartphone apps to find out whether they’ve reached school. “Perhaps they need to ditch the uniform. The kids are getting targeted. I don’t know if it’s all antisemitic but they have nice phones and won’t fight back.”

Mrs Fink also complained of reductions in Home Office funding, which is administered by the CST, last year.

The CST said that all Jewish schools received a four per cent cut in government funding last year, “due to the growth in the number of schools that are now eligible for the grant.”

Debbie Lebrett, headteacher of Hasmonean Boys’ School, in Hendon, also contacted parents regarding a series of muggings and “unpleasant incidents” which have taken place on bus routes used by pupils.

This situation is a classic example of “blowback” for the Jews who have been the leading purveyors of diversity in our White societies.  In this real-world situation, Jews are finding out the hard way that the “diversity” they are peddling ultimately will come back and haunt them, victimizing their own children.

Without the massive power of the Israeli army protecting these jewish high school students, they are quickly finding out that these Muslims and Africans don’t care about their jewish privilege, nor are they concerned about being accused of being “antisemitic”.  These Jews are realizing that on a level playing field, more often than not, they will be the victims of inter-racial violence.

So this is a microcosm of the jewish dilemma: they are compelled to destroy White homogeneous societies in which they don’t feel comfortable or welcome, but when they diversify these safe and stable White societies, they themselves become victims of the associated violence.  But when the violence gets bad enough, they will all head to Heathrow and get on the next flight to Israel, and leave the mess they’ve created for the White man to clean up.