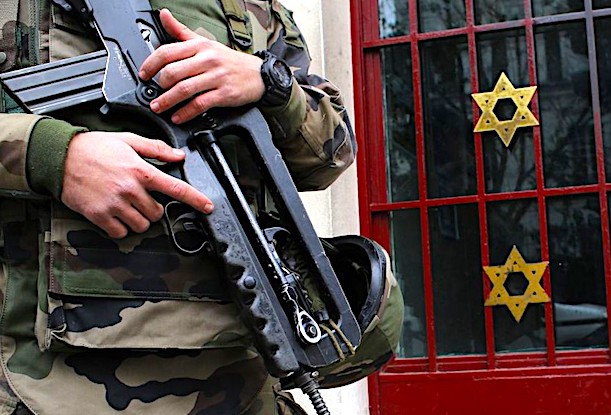 The Simon Wisenthal Center, an international Jewish supremacist group, claims that Jews in France are now so hated that the French government is obligated to provide them with armed military guards virtually everywhere they go in public:

In the wake of horrific antisemitic attacks in France, from the Hypercacher kosher supermarket siege in 2015 where four Jewish hostages were killed, to the brutal murder of Mireille Knoll, an 85-year-old French Jewish woman and Holocaust survivor who was murdered in her apartment in Paris in 2018, anti-Jewish hatred in France is still not decreasing.

The case of Sarah Halimi’s murderer is a strong example. On April 4, 2017, Sarah Halimi, a 65-year-old Jewish woman, was beaten and defenestrated in Paris. The Court Judge decided in July 2019 that there was no criminal responsibility and that her murderer was “unfit for trial”. The case was still being appealed to the Court of Cassation a couple of months ago.

“Following the 2015 Jihadi assault on a Paris Kosher supermarket, then President Hollande provided a security detail to all Jewish buildings that needed it…,” Samuels continued. “The military guards were eventually removed and never replaced by the Macron administration.

Last Thursday, a 29-year-old Jewish man was violently assaulted and beaten unconscious in the 19th arrondissement district of Paris while he was picking up his seven-month-old daughter from his parents. The two attackers of reportedly African descent were screaming, “Dirty Jew! Dirty Jewish son of a whore, you’re a dead man! We will kill you! Dirty Race!”

According to a survey taken by AJC in Paris published in the beginning of the year, both Jews (67%) and non-Jews (47%) identified antisemitism as a serious problem in French society. Moreover, the feeling of insecurity is on the rise. Over half of French Jewish (55%) have been insulted or threatened in the street and more than half of the Jewish children (59%) said that they had suffered physical abuse in school.

However, nearly one in two French Jews (47%) and members of the non-Jewish public (48%) raised doubts that French President Macron was tackling antisemitism effectively, compared to 46% of Jews and 41% of the Non-Jews public who questioned the commitment of the French government to treat anti-Jewish hatred as a national priority.

This article conveniently fails to point out that all of these cases of violence toward Jews were committed by Third World Muslims and Africans that have flooded France at the behest of the Jews — and their desire to make every country they dwell in multi-racial — except for Israel, of course.

High level French Freemasons — many of whom are Jews — have admitted that these ‘antisemitic’ attacks of Jews by Mulsims is directly related to the brutal Israeli occupation of Palestine.

Of course, Israel has a standing offer to take any and all of France’s Jews if they no longer feel ‘comfortable’ living in the multi-racial cesspool they’ve created there.

But Jews seem to prefer to live among the violent antisemites in France — that is, if they can have free armed escorts and guards courtesy of the French taxpayers.

Rothschild stooge President Manuel Macron has told the Jews that France is their home, not Israel — he seems to be the only person in France that believes that.

But this problem isn’t confined to just France — there has been a call for all Jews in the entire European Union to receive armed guards.

Only an antisemite would ask why the Jews are so hated they need armed escorts in every country they dwell.