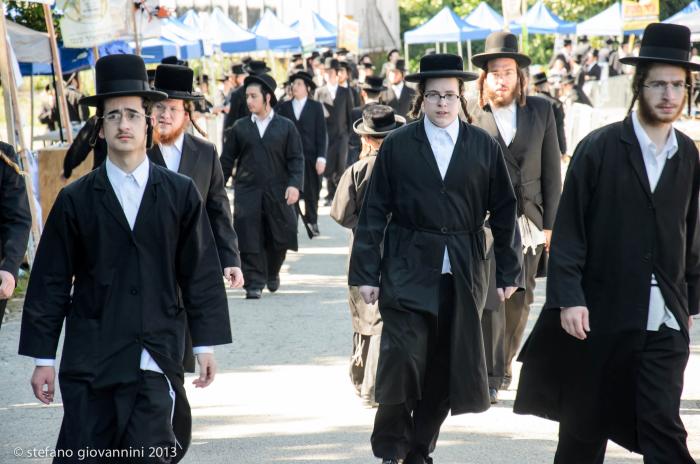 The Town of Chester, New York is buying up as much land as possible in its surrounding area to prevent a group of aggressive Hasidic Jews from moving in and taking over:

The Town of Chester has finalized a contract to purchase the Sugar Loaf Performing Arts Center for $1 million, part of a sweeping effort to buy up as much open land in the town as possible to keep unwanted future Hasidic development in check.

The contract was approved at a Town Board meeting Wednesday night. The 8.8-acre property was appraised at $1.8 million, according to Chester Supervisor Alex Jamieson. It was a good deal for the town, he said.

Jamieson characterized the purchase as one of several to be finalized in the coming weeks and months that are meant to slow the expansion of the Hasidic community outside of Kiryas Joel.

“People realize what the possibilities are. The fear of KJ expanding into Chester is scaring people half to death,” Jamieson said Thursday. “It’s not just the Greens at Chester. They are buying property all around it.”

Earlier this year, Chester residents learned that Greens at Chester, the 431-home development being built on a 110-acre site west of the Whispering Hills subdivision, would be a predominantly Hasidic community and could eventually be home to 3,000 people.

The news brought hundreds of people to a Town Board meeting, where they urged elected officials to stop the development. At the time, Jamieson told the public the town would explore instituting a ward system for electing Town Board members and adopting an open-space preservation program.

“We made a promise to the people to preserve as much of the town as possible,” Jamieson said. “This is just the first phase.”

In addition to the Sugar Loaf Performing Arts Center purchase, the town is also finalizing a contract to buy a 26-acre property on Route 94 in Chester where Primo Sports originally planned to build a sports complex. The Town Board expects to vote on that purchase at its next meeting, Jamieson said.

The ADL, of course, has condemned the town supervisor from trying to preserve the quality of life in his town — basically for doing his job — and smeared him as an “antisemite”.  Jews need to come to terms with the fact that their presence may annoy non-Jews.  Their ways are not the ways of White Christians, and when they move in to any area, it creates conflict, just as it does when Blacks move in.

It is because of situations like this one that Jews want to introduce laws to make “antisemitism” illegal.  If you even notice that someone is a Jew, you will face heavy fines and jail.  That’s how they want it, and that’s how it will be unless White people wake up to what is coming.  If it’s illegal to criticize Jews, we will have no way to oppose their agenda of complete domination of society.  Sound fantasical?  That’s exactly how they want you to react to such an idea.