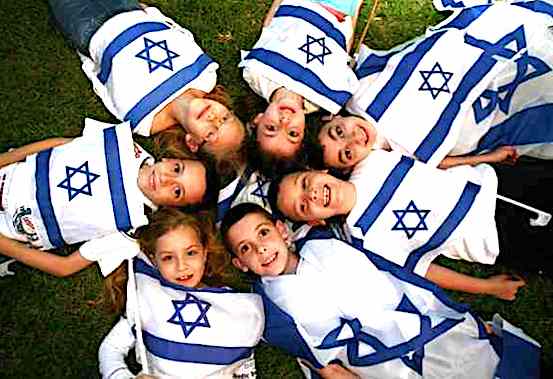 “A recent survey by the Anti-Defamation League found that nearly a quarter of Americans believe American Jews are more loyal to Israel than to the United States, [but based] on my experience teaching at half a dozen Jewish day schools over the past twelve years, I am shocked that the figure is so low:

Imagine being a non-Jewish employee at one of these schools in New York City, maybe a security guard or a special-education teacher’s aide. You walk into the building and see Israeli flags hanging all over the place. Lessons are delivered in Hebrew — often at the obvious expense of student comprehension. Children sing HaTikvah in the morning with enforced gusto. Israeli soldiers regularly address the student body. Children wear kippot and hoodies emblazoned with the logo of the Israel Defense Forces.

Zionism is messaged in these schools as the most essential attribute of our students’ identity. It’s a huge problem.

I’ve heard teachers or administrators say at assemblies things like “you don’t belong in America,” “Israel is your country” and “the IDF are your soldiers.” When Prime Minister Benjamin Netanyahu spoke to the United States Congress in opposition to the Iran nuclear deal, against the wishes of President Obama, the high school where I was working cancelled classes to watch “our Prime Minister.” That’s a real quote.

In the six schools at which I have taught, HaTikvah was sung more often than the Pledge of Allegiance or the Star Spangled Banner. Israeli national holidays are taught with a reverence or solemnity that outstrips what is accorded to religious or American ones. Veteran’s Day was never discussed, but Yom HaZikaron, Israel’s Memorial Day, had special projects and assemblies. Many of these schools receive grants from the Avi Chai Foundation, which requires recipients to declare that they “seek to instill in our students an attachment to the State of Israel and its people.”

Are we really to blame non-Jewish staff if they leave campuses thinking that American Jews are more loyal to Israel than to the United States? Perhaps we tell ourselves that they just don’t understand the incredible, mystical, nuance that underpins the relationship between Judaism and Zionism. That while it sometimes looks like we’re supporting a foreign government, it’s really about our hopes, dreams and historical identity.

But that’s not what I’ve experienced. The jingoism around Israel and its military goes beyond any possible doctrinal link between Judaism and Zionism. There is no similar enthusiasm for the Torah in these schools. On the contrary, there was an understanding at all the schools in which I have taught that we don’t push religion, that we must teach about religion in a detached way. So while we may teach what the Torah says, we are pretty much forbidden from actually saying the key point — that “as Jews we have to do what the Torah says.” It’s like a very lame, extremely limited, comparative religion class. But when discussing Israel and Zionism, there is rarely room for leniency, disagreement, or apathy.

Many Jewish leaders were outraged last summer when President Trump suggested that Jews who vote for Democrats showed “great disloyalty”, presumably to Israel, raising an old anti-Semitic trope about American Jews’ fealty to the United States. But anyone who has witnessed daily life at a Jewish day school and thinks that accusations of dual loyalty are anti-Semitic is either spiteful or idiotic.

Of course, some saw this coming. After the founding of the state of Israel, the 1950 Blaustein-Ben Gurion agreement demanded that Israel not claim the loyalty of Diaspora Jews since such loyalty would jeopardize the Diaspora communities.

Now, more than 70 years into Israel’s existence, we are at a disadvantage regarding old questions of loyalty. The question is whether we are being wise in how we combat these suspicions. If our loyalty really is — as it must be — to the United States, then it is time to think about how we show it. We’re really not being at all clear about it in our Jewish day schools. Until this is addressed in a meaningful way, we are in no position to feign shock at how it is perceived.

Anti-Defamation League smears anyone as an ‘antisemite’ who dares claim Jews have dual loyalties with Israel, but don’t expect them to go after this jewish teacher, who can prove it, any time soon.

This teacher insists on anonymity not because she [assuming she’s female, ed.] fears what the ‘gentiles’ will say but rather what the ADL and the Jewish Defense League will do to her.  If she used her real name, she would never be hired at another jewish school again, and her life could be threatened until she changed her opinion.

After all, the ADL is pushing hard to make it a criminal offense to make such ‘dual loyalty’ claims against Jews, and while this exposé shows just how ‘idiotic’ and hypocritical they are, they aren’t about to let the truth get in the way of their plans.

If this article proves anything, it’s not just that many Jews are indoctrinated to have ‘dual loyalties’ with Israel, but rather that they have loyalty to Israel first and foremost, and virtually none left for America at all.

And this remarkable article goes a long way to explaining how Jews who were born in — and grew up in — America could have felt perfectly justified in aiding and abetting the Mossad’s attacks on America on September 11, 2001.

This dual loyalty caused many Americans to die on 9-11, including many Jewish-Americans who worked in the World Trade Center, which shows how much contempt they have even for their own kind who blindly support them.