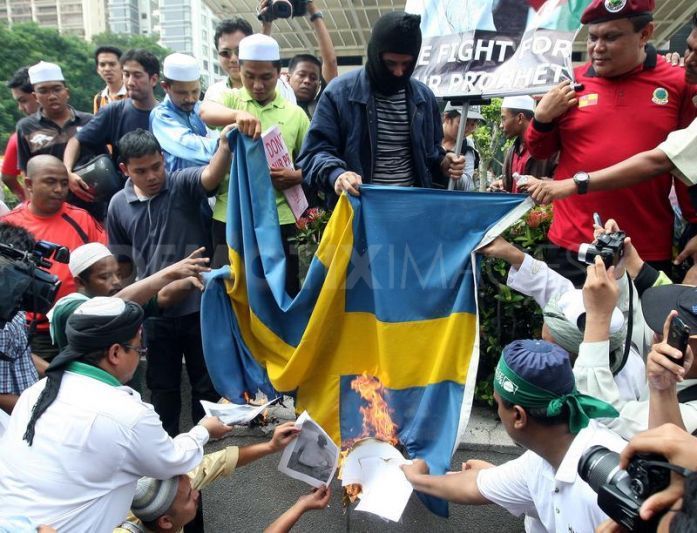 According to the Institute for Strategic Dialogue, a jewish-founded and -financed think tank, any bad news about Sweden is part of a vast right wing conspiracy to make the utopian socialist state look bad:

“The image of Sweden abroad has changed significantly lately,” writes Fria Tider. But everything is actually a “smear campaign” according to the British think tank “Institute for Strategic Dialogue” (ISD).

ISD – which cooperates with George Soros’ foundation Open Society – argues that a global right-wing conspiracy, aimed at Sweden in order to slander the country, is ongoing.

This because foreign media in its reporting on Sweden is focusing on car fires, rapes, shootings, no-go zones, Islam and sharia and the negative consequences of migration.

“They try to tear down the image of Sweden as a liberal utopia and replace it with the image of an unstable state – flooded by migrants who Islamise the country,” says analyst Chloe Colliver at ISD in an interview with TT.

“This is not true,” she continues. In fact, it is so-called right-wing extremists who spread “misleading or false stories” about Sweden.

“It is primarily the ‘media image’ of Sweden that has changed, not the social development in the country,” she says.

This darkened image of Sweden is then used by political forces in other countries, such as Donald Trump in the United States, to gain support for their policies.

Paul Rapacioli, founder of The Local, is of the same opinion. He argues that there is a war on values ​​in the Western world and that Sweden is used as an example of why left-wing liberal politics don’t work.

According to him, it is easy to “lie or twist the truth” about Sweden because the knowledge of the country is relatively small.

Those claimed to be behind the “misinformation” are so-called “right-wing” networks in different countries, including the United States, the United Kingdom, Poland and Hungary.

The Russian channels Sputnik and Russia Today are also pointed out as responsible for the erroneous image.

The conclusion in TT’s article is that it is the Russian State as well as extremists on the right who, through exaggerations and lies, try to ruin Sweden’s reputation abroad.

The Institute for Strategic Dialogue is a radical left-wing jewish think tank, founded by a wealthy Jew from Austria, George Weidenfeld, who pretentiously took the English title of “Baron Weidenfeld” to join the ranks of the ever-growing jewish aristocracy that now controls England.  Weidenfeld was a staunch Zionist and political advisor to Chaim Weitzmann, the first President of Israel.  He was also “close friends” with Angela Merkel, who, no doubt, got regular marching orders from the likes of Weidenfeld and George Soros.

Weidenfeld’s ISD claims to “combat extremism,” but the only “extremism” that it seems to combat comes from the political Right that opposes the ISD’s radical neo-Bolshevik agenda.  Its most recent campaign, partnering with the jewish-controlled Google corporation, was the “Internet Citizens” workshops to brainwash children into ignoring any “fake news” that contradicts the ISD’s radical jewish agenda.  And a major part of that agenda is portraying Sweden to the world as a Socialist Multicultural Paradise, and if you disagree, you’re an “extremist”.