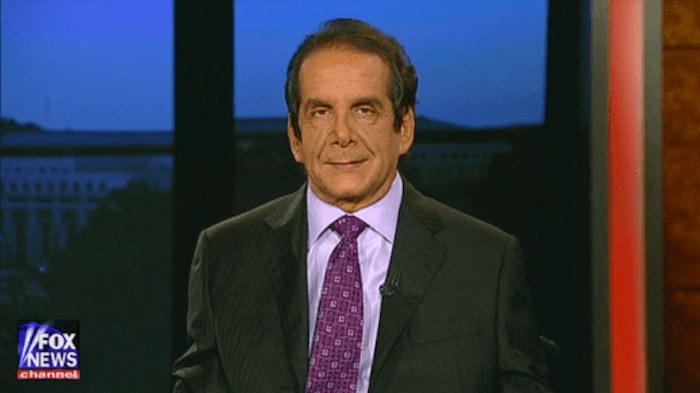 “Charles Krauthammer, one of the warmongers at the Washington Post, has passed away. He was sixty-eight. CNN called him a “legendary conservative intellectual.” But what was this man known for? Intellectual pursuit? Of course not. Keep in mind that any intellectual pursuit cannot exist without the moral law.

Krauthammer declared back in 2004:

“We will support democracy everywhere, but we will commit blood and treasure only in places where there is a strategic necessity—meaning, places central to the larger war against the existential enemy, the enemy that poses a global mortal threat to freedom.”

What Krauthammer failed to tell his audience here was that he was not advocating a kind of democracy based on the moral law and political order. He was essentially articulating the Talmudic ideology, which basically says that Jews like Krauthammer are special and that other people are, in the words of the late Rabbi Ovadiah Yosef, “donkeys.” Krauthammer testified:

“I grew up in a Modern Orthodox home. I went to Jewish day school right through high school, so half of my day was spent speaking Hebrew from age six to 16. I studied thousands of hours of Talmud.

“My father thought I didn’t get enough Talmud at school, so I took the extra Talmud class at school and he had a rabbi come to the house three nights a week.”

At McGill University, Krauthammer was introduced to the writings of Maimonides through Rabbi David Hartman. Krauthammer again confessed:

“That had a big influence on me in the sense that I was going away from my Jewish upbringing, thinking of it as narrow and parochial, and when I was introduced to Maimonides, it was just sort of at the highest level of world philosophy, Aristotelian philosophy applied to Judaism.”[1]

There is more to Krauthammer than meets the eye and ear: “I once described to a friend my Jewishness—I said, I’m a Jewish Shinto. I believe in ancestor worship. That’s the heart of my Judaism.”[2] When he was asked, “What about your connections to Israel?,” Krauthammer did not hesitate to say:

“As you see in my writing, it’s very strong. That would be a third example of my connection to Jewish history. I’ve always been a Zionist, and I believe with utter conviction in the justice of the cause, which makes my writing about it clear and direct. [Defending Zionism] is pretty much out of fashion these days. But to me it’s extremely important, in and of itself as a just cause and also in the context of America and how it looks at itself as, among other things, a champion for freedom around the world.”[3]

There you have it. What was driving Krauthammer’s political ideology is 1) ancestor worship, 2) Zionism, and finally the Talmud, which essentially provides the diabolical foundation of the Khazarian Mafia, a cult system which continues to drag much of the world to submission through covert operations.

If Krauthammer was a “legendary intellectual,” then the so-called “conservative” party is in a sorry state of affair.”

Comment:
There is nothing “conservative” about this Talmudic scholar posing as a political commentator – from a young age, rabbis taught him to hate non-jews, especially Christians, whose only purpose in life is to serve jewish interests.

According to Krauthammer’s beloved Talmud, only jews are human, and even the best of the goyim deserve to be killed – preferrably in manufactured wars whose real purpose is to destroy any “existential” threat to the ersatz State of Israel.

There is no rest where Krauthammer is now going.