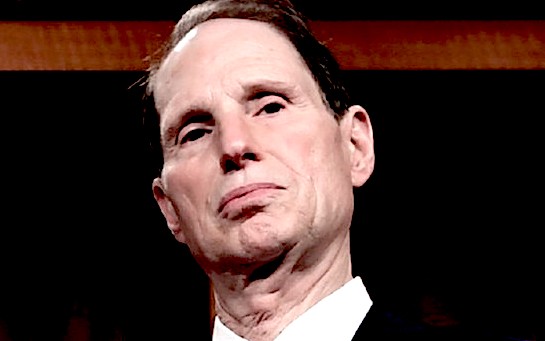 Sen. Ron Wyden (D-OR) posted a video Saturday bragging about how he had escorted an eight-and-a-half months pregnant migrant from Mexico into the U.S. because the woman allegedly was having a ‘difficult’ pregnancy:

Wyden does not tell viewers that the woman is a Mexican citizen and that she brought her husband and 3-year-old son with her across the border. Apparently there are no competent maternity hospitals in Mexico.

Wyden said he was touring a migrant facility in Juarez, Mexico accompanied by a doctor who diagnosed a pregnant Mexican woman seeking asylum in the U.S. as having a potentially fatal condition.  Wyden brought the woman to a border checkpoint and talked his way past the guards.

“I went across the border into Juarez, Mexico to tour a shelter housing asylum seekers being forced to stay in Mexico instead of the U.S. while they wait to hear if they’ve been granted asylum. They are fleeing persecution and violence, seeking a better life for their families.”

“While across the border, I met a young woman who was seeking refuge in the U.S., who was more than 8 months pregnant.”

“There were concerns she had serious medical complications that were life-threatening to her & her unborn baby. She tried to get across the border but was denied until it became clear to law enforcement that I was accompanying her. She was taken to a hospital to get care.”

“It shouldn’t have to take being escorted by a U.S. Senator to get asylum seekers and migrants to safety in the United States. After my time in Juarez, I’m reflecting on the hundreds — perhaps thousands — of women just like her who are unable to get the medical care they need.”

“The Trump administration is treating children & their families at the border like they’re dangerous criminals, keeping them in conditions not fit for any person. Make no mistake: when I return to Washington, I will be fighting to put an end to these life-threatening policies.”

Reporter Bob Moore provided the background on the woman’s story missing from Wyden, that the woman is Mexican and that she brought her family with her.

Apparently Moore did not ask Wyden why the woman could not be treated in a Mexican hospital.

Senator “Wyden” comes from a family of  “Holocaust survivors” who, for unknown reasons, changed their last name from Weidenreich to the more anglo-sounding “Wyden”.   Now that he has managed to get selected as a powerful U.S. Senator, he appears to abuse that power by aiding and abetting a foreign invasion of America. Not only is he providing expensive free health care to this pregnant invader, her child will be born a U.S. citizen, and become an “anchor baby” who will ensure that the rest of the family will never be deported.

If the powerful “cabal” that secretly controls America were indeed Christian, Senator Wyden would have been arrested at the U.S. border for knowingly conspiring with Mexican nationals to illegally gain entry in flagrant abuse of his office and Federal immigration laws, along with the obvious charges of treason.  Instead, the fawning press will see him as some kind of folk hero who “did the right thing” and ignored the “personal risks” to himself and his “reputation”.  In reality, we have no border and no immigration laws protecting America, as long as we have “leaders” like the arrogant and subversive Senator Wyden.