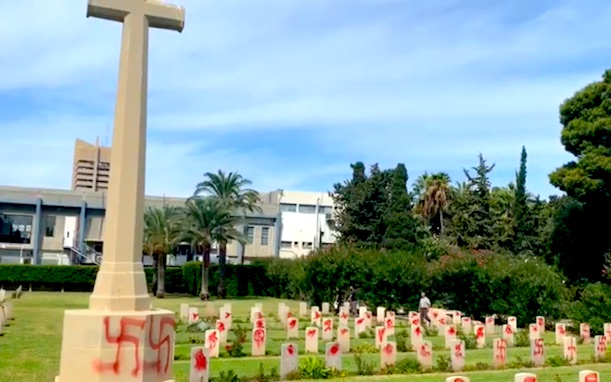 Anti-Christian Jewish vandals have struck again in Israel as part of an ongoing campaign of hate that openly targets Christian churches and cemeteries:

Dozens of tombstones were vandalized on Friday, with several graffiti painted on them, including swastikas, at the British cemetery in Haifa, according to the Police Spokesperson’s Unit.

There are no immediate suspects as the police investigating the scene, regarding it as a possible “hate crime.”

The Haifa British cemetery holds British soldiers who died fighting in Israel during both World Wars.

Jews regularly scream bloody murder when anything even remotely resembling a swastika is used to vandalize a Jewish building, but when Jews themselves use swastikas to vandalize a Christian cemetery in the “Holy Land,” they shrug their collective shoulders and look the other way.

And even though anti-Christian hate crimes are a chronic problem in Israel, no one is clamoring for stricter laws and harsher punishments for Jews who engage in these vicious and irrational attacks.  The Jewish Pharisees became a byword for hypocrisy for good reason.

In 2013, suspected Jewish ‘extremists’ firebombed a Catholic monastery and scrawled the phrases “price tag,” “death to the Gentiles,” and “revenge” on the hallway walls.

That this most recent vandalism occurred at a British cemetery is not a random coincidence either: the Jews have hated the British since they kicked the Jews out of England in 1290 for usury and the ritual murder of Christian children.  On top of that the Israeli terror gangs targeted British soldiers who were stationed in Palestine during WWII, murdering them in cold blood.

And today, Britain claims that Israel is one of their “greatest allies”, which isn’t surprising when they elect another Zionist Jew like Boris Johnson as Prime Minister.