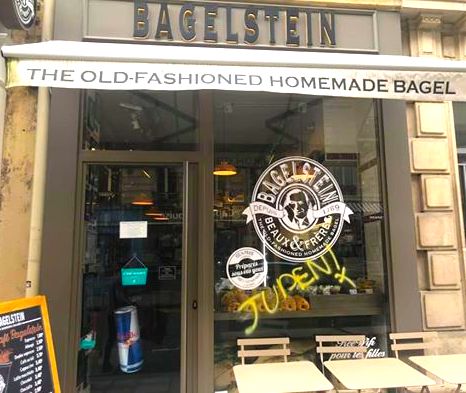 Interior Minister Christophe Castaner said that the total number of recorded antisemitic acts rose to 541 in 2018 from 311 in 2017, as he “decried” the “poison” of “hate”:

He spoke in the Paris suburb of Sainte-Genevieve-du-Bois, where vandals chopped down trees planted in honor of a Jewish man tortured and killed in 2006.

The incident was the latest in a recent string of racist vandalism.

Castaner vowed that his government will fight anti-Semitism, calling it “an attack against hope.”

He did not link the rise to any specific groups.

A prominent French Jewish watchdog group said in December that widespread protests in the country over taxes were giving rise to anti-Semitic rhetoric.

The head of the National Bureau for Vigilance Against Antisemitism, or BNVCA, Sammy Ghozlan, said that “the ‘Yellow Vests’ movement has an anti-Semitic base that repeats conspiracy theories about Jews and power.”

Launched in November as a protest against a proposed rise in diesel and fuel taxes, the movement has expanded into an anti-government drive featuring violent riots that have shut down the French capital several times. Some protesters have been filmed carrying signs and chanting slogans describing French President Emmanuel Macron as a “whore of the Jews” and their “puppet.”

Such language “was present from the very beginning of the protests and persists,” Ghozlan said, although he added that it exists “on the margins” of the protests.

In the first 10 months of 2018, more than 2,300 French Jews reportedly made aliyah, or moved to Israel, while the number of those seeking information about aliyah from the foundation has reportedly increased.

The Jews are careful not to blame any particular group for this “alarming” rise in hate for the simple reason that they don’t want all the blame to be directed toward antisemitic Muslim migrants.  They obviously want to leave open for the possibility that this antisemitism is coming out of the White Yellow Vest protesters, many of whom are clued in enough to understand the hidden jewish hand in the wrecking of the French nation.

But it does beg the question as to why Jews use their control of the press to announce to the world just how disliked they are as a people.  It’s almost as if they brag about how disliked they are.  One would think that would be something that they wouldn’t want people to know.  After all, when a group of people are overwhelmingly disliked over a period of thousands of years, it’s only natural for people to wonder what they are doing to be so disliked.

The Jews will always tell you how despised they are but will never tell you why.  And any proof that antisemitism is rational, is swept aside as just another jewish “canard”.