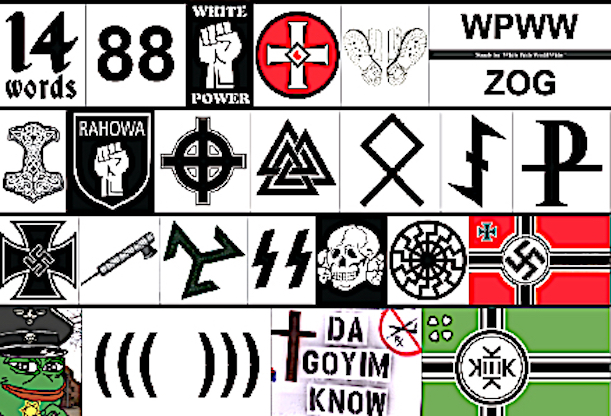 Nikita Malik, the Jewish director of the official-sounding Center on Radicalization and Terrorism in the U.K., is pushing for even more draconian laws to censor all forms of ‘antisemitism’, including making the use of ‘neo-nazi’ imagery online a form of ‘domestic terrorism’:

On the “Advocacy Anywhere: Coronavirus, Conspiracy Theories, and the Current State of Global Antisemitism” webinar held via Facebook and Zoom, Katharina von Schnurbein — the European Commission’s coordinator on combating antisemitism — noted that conspiracy theories blaming Jews for the coronavirus were “dangerous not only because they create an atmosphere for the Jewish community that is very unpleasant,” but also “we know that conspiracy myths have translated into attacks in the past.”

She noted that new regulations on combating hate speech online had been adopted by the EU and “what will be the next step is to ensure this is not only done on a European level, which is important, of course, but unless it trickles down and every mayor, every school director understands what needs to happen, there will be no change for the Jewish community. So, this will be the challenge now.”

Nikita Malik — director of the Center on Radicalization and Terrorism at the Henry Jackson Society in the UK — emphasized the importance of legislation, particularly in regard to far-right antisemitism.

Malik said she was struck by the “difference between hate crimes legislation — which is what is usually used in the United Kingdom for antisemitic hatred and antisemitic violence in the real world — and terrorism legislation.”

“Neo-Nazi imagery and white supremacism deserve to be classified as terrorism,” she said, “because it is that serious. It’s not hate crime, it’s not an opinion against a certain category of people, it’s actually looking to enact violence and often eradicate an entire group of people. It’s very serious and it has a political objective, and as a result, it deserves to be designated.”

“If I post something or say something that goes against those tech companies’ rules,” she said, “it’s not a freedom of speech issue, its actually a corporate responsibility issue for them to clean out their platforms.”

Huffnagle sounded an optimistic note, however, saying, “We have seen improvement. If you look at just 10 years ago, where we were in this space, it’s leaps and bounds for what tech companies are able to respond to, what they’re doing now. There is movement, but we’re in the middle of it right now and we can’t stop.”

Jews now have a virtual monopoly of ownership of major online platforms, which has allowed them to enforce their draconian censorship, under the guise that the platforms are privately-owned and therefore immune to “freedom of speech” laws.

“But what does it matter what “religion” or “race” the media owners are?” you ask.

Because they want to censor any and all criticism of themselves by falsely characterizing it as ‘hate’.

If you have a plurality of media ownership, no one would be immune to criticism.

And if you want an example of what a society is like where criticism of Jews was not only not allowed but carried the death penalty, look no further than the brutal, dehumanizing Soviet Union.

Believe it or not, that is where we are rapidly headed — where Jewish power is becoming virtually unopposed, and all forms of opposition — including symbols of that opposition — will become illegal.

Make no mistake, in the Jewish-dominated Soviet Union, Christianity was outlawed, as were Christian symbols, and it’s hard not to notice that Jewish interest groups are working feverishly to outlaw any public displays of Christianity right now.

Christianity has now been officially blamed for contributing to the so-called “Holocaust”.

After all, in the mind of the Jews, Christianity is the basis of all antisemitism, and the sign of the Cross is the ultimate “neo-nazi” symbol of “Jew hate”.

“But that could never happen in America,” you assure yourself.