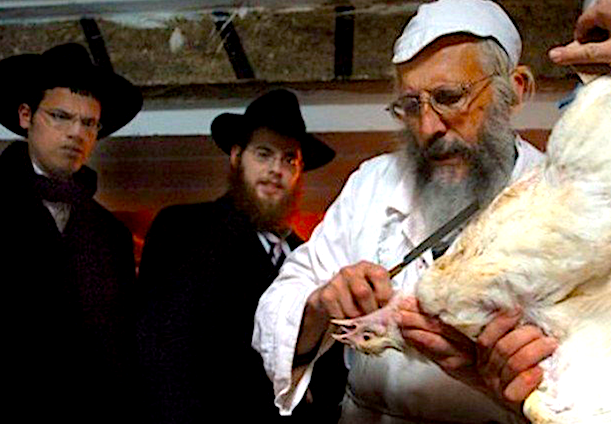 Jewish Agency Chairman Isaac Herzog is promoting a bizarre conspiracy theory that Belgium’s ban on jewish ritual slaughter of animals is part of a secretive plan to ultimately expel the Jews once again from Belgium:   .

This ban, initially legislated in 2017 and in effect regarding Jewish and Muslim slaughter since September 1, 2019, is of grave concern to The Jewish Agency, the organization mandated with ensuring the spiritual and physical well-being of Jewish communities throughout the globe. The Jewish Agency views the ban as an indication of a dangerous erosion of freedom of religion for Jews in Belgium.

The ban on ritual slaughter in the region of Wallonia is currently being enforced, although a court ruling is pending on an appeal. A similar law was passed by the Flanders regional parliament in Belgium.

In the letter, Chairman Herzog stated: “This is not only an issue of freedom of practice for traditional Kosher butcheries…. This is an unacceptable infringement of general freedom of religion.”

He continued to say: “This could indeed be the beginning of a creeping expulsion of Jews, and – as Rabbi Pinchas Goldschmidt, President of the Conference of European Rabbis said recently of this grave development – another sad day for Europe’s darkening skies. We thought that restrictions on the practice of religion belonged to Europe’s history, not to its present and even less so to its future.”

“I call on you to do your utmost in order to attempt to roll back this legislation so as to find the right balance between animal rights…and freedom of religion.”

Apparently, it is inconceivable to Jews that the Belgian government simply finds the wanton killing of animals as part of an alleged “religious” ceremony to be morally repugnant and needlessly inhumane, so instead they’ve concocted a bizarre conspiracy theory that the Belgians are only pretending to care about animals as part of a secret, diabolical expulsion plan to rid the country once again of Jews.

Despite constantly accusing everyone else of being ‘conspiracy theorists,’ Jews themselves are the greatest purveyors of paranoid tall tales, such as accusing the ‘evil’ Nazis of making 6 million Jews magically disappear without a trace in only 2 years during WWII.

They also concocted the outlandish fairy tale that a dialysis patient living in a cave in Afghanistan trained 19 Arabs with box cutters to fly two kamikaze airliners into the World Trade Center on 9-11.

These are the same people who claim that they’ve been kicked out of 109 countries and states in Europe for no reason whatsoever.

So if anyone would be able to figure out the real reason why Belgium banned ritual slaughter of animals, it would be these ultimate experts in conspiracy theories.