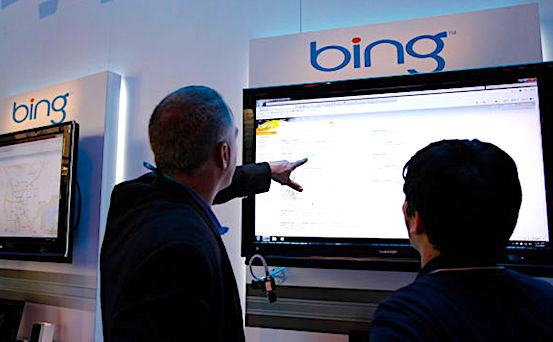 The Lawfare Project, a jewish supremacist advocacy NGO that claims to fight antisemitism, especially online, has filed a legal complaint against Microsoft in Spain because its search engine Bing links to an antisemitic website:

The Lawfare Project — following up on a similar complaint filed against Google last year — holds that Microsoft has not taken action to stop antisemitic sites from appearing in search results.

If the court decides against Microsoft in this case, it could set a legal precedent, as it would be the first time a company is found liable for third-party content.

Brooke Goldstein, executive director of The Lawfare Project, said in a statement, “It’s extremely irresponsible for Microsoft and Bing to allow this offensive, anti-Jewish content to continue circulating on the internet in violation of the domestic law in Spain and the EU Directives on the matter.”

The group’s Spanish attorney, Ignacio-Wenley Palacios Iglesias, said, “The permanent, ubiquitous, and everyday influence internet service providers have on society as a whole cannot be understated.”

“The impact of these providers requires a level of structure and responsibility to address the most extreme, illegal content created by third parties that now enjoy immediate global access via the internet,” he added.

In the 2019 case, Google ultimately agreed to block antisemitic content in its search results, including neo-Nazi and Holocaust denial websites.

How is it even possible for any search engine to not include content that Jews will find ‘antisemitic’?  After all, ‘antisemitic content’ is anything that the Jews don’t like.

And as Alexander Solzhenitsyn observed, ‘“For a Jew nothing is more insulting than the truth,” which guarantees that whatever the Jews find ‘offensive’ and want censored is, in fact, The Truth.

And notice how this article conveniently omits what the alleged ‘antisemitic’ content is in this case.  We should just trust this self-serving jewish supremacist group that whatever it is is really bad, and will cause people to ‘hate’ Jews for ‘no reason’.

Jews are still boiling mad that Christian Spain expelled the Jews in 1492, and they are still coming up with different ways of punishing the country for this unforgivable ‘hate crime’.

But then again, they’ve been kicked out of every country in Europe multiple times for no reason whatsoever, and yet they keep insisting on living in Europe and making it illegal to dislike them anymore.