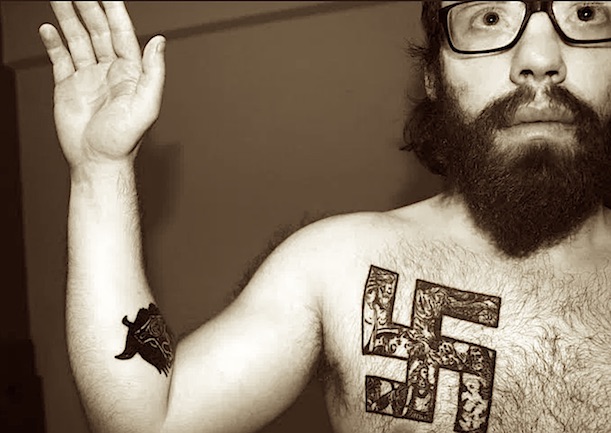 Andrew ‘Weev’ Auernheimer, a Jewish internet troll who enjoys flashing the swastika tattooed to his chest while crashing webinars, is now an ‘internationally wanted’ man, according to the Jewish News Syndicate:

A white supremacist who disrupted a March 24 webinar for Jewish teens on the video-conferencing platform Zoom about anti-Semitism, featuring U.S. Deputy Special Envoy for Monitoring and Combating Anti-Semitism Ellie Cohanim, is apparently the same man wanted by Australia’s Human Rights Commission for violating the country’s Racial Discrimination Act since the website’s creation.

Andrew Alan Escher Auernheimer, also known as “weev,” has a history of expressing anti-Semitic and other bigoted views. He appeared in the video conference, hosted by the Greater Boston chapter of NCSY, a Jewish youth group, and pulled down his shirt collar to show a swastika tattoo on his chest.

New evidence uncovered by the Canary Mission, an anti-Semitism watchdog site, has revealed that Auernhaimer has another pseudonym, “Joseph Evers,” who was listed as the owner and creator of a racist website and Wikipedia parody site called Encyclopedia Dramatica created in 2010. Since 2010, Evers has been wanted by Australia’s Human Rights Commission for violating the country’s Racial Discrimination Act in connection to his creation of the racist website.

The website is “on the Australian Communications and Media Authority’s list of websites to be banned under the government’s planned Internet filter,” reported Australia’s ABC News.

It’s interesting that this article fails to mention that Auernheimer is Jewish or his connection to the Daily Stormer — as that website’s long-time webmaster.

If Jewish media ‘experts’ are going to sell the boogeyman of ‘White supremacy’ to the unwashed masses, it’s probably best to ignore just how many Jews are posing as White supremacists.

If Jews everywhere knew that this notorious ‘internationally-wanted’ White supremacist who was “zoombombing” their webinars and flashing his swastika chest tattoo at them was a fellow Jew, they would probably just laugh at him instead of reporting his adolescent antics to Interpol.

But with all this Black and Antifa mayhem and lawlessness going on in our cities, the Jewish press is desperate to refocus our collective disapproval onto their real enemy — “violent” White people.

So now they are back to promoting this Jewish troll who looks like Allen Ginsberg with a swastika on his chest.

No wonder a prominent Jewish professor recently claimed that ‘White supremacists’ are not a serious threat to Jews.

Who, except the ADL, would indeed take this guy seriously?