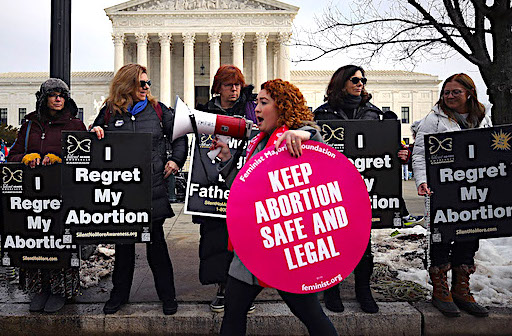 More than 50 so-called ‘faith-based’ organizations published a letter spearheaded by the radical National Council of Jewish Women calling on Congress to pass a bill that would protect access to abortion services:

Twenty Jewish organizations were among the 53 groups that signed the letter in support of the Women’s Health Protection Act.

The measure would provide a safeguard against bans and medically unnecessary restrictions specifically tied to abortion. It has at least 200 co-sponsors in the U.S. House of Representatives and 42 in the Senate.

“We affirm our nation’s founding principle of religious liberty, which is integrally bound to reproductive freedom. Religious liberty includes the right to follow one’s own faith or moral code in making critical, personal reproductive health decisions, without political interference,” the letter says.

“While we respect the right of every individual, including our lawmakers, to hold their own personal and religious beliefs, our country’s Constitution demands that no one impose a single religious viewpoint on all through civil law or regulation. The Women’s Health Protection Act is essential legislation that embodies these shared ideals.”

The idea that the Founding Fathers envisioned ‘religious freedom’ to justify infanticide is a satanic lie.  It’s this type of twisted, subversive ‘reasoning’ that forced the Byzantine Empire to ban Jews from holding public office or teaching school children.

Our ‘religious liberty’ simply meant that we were free to worship whichever sect of Christianity that we chose.  The Founding Fathers understood we had freedom only under Christ.

Our inalienable rights came from God, not from our government.

When we become alienated from God, we will inevitably lose those rights.

And those who refuse to be ruled by Christ would inevitably be ruled by Jewish bankers, which is exactly what the French Revolution proved to anyone with the eyes to see.

Our ‘freedom to abort’ is all part of living under an anti-Christ Jewish Tyranny, along with gay marriage, transgender rights, and ultimately legalized pedophilia.

According to the jewish ‘conservative’ Dennis Prager, the anti-Christ agenda of these ‘faith-based’ groups is all part of ‘messianic Judaism‘.

And, yes, within The Talmud, the foundation of Judaism, abortionists do find the ‘moral’ justification for infanticide.

So much for ‘judeo-Christian’ values.