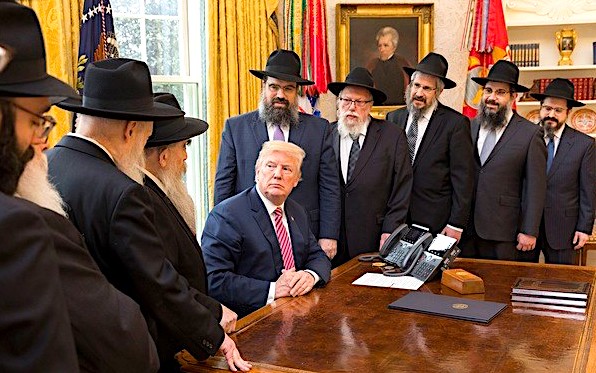 As more and more Americans are waking up to the fact that President Trump has handed over the keys to our nation to powerful Zionist interests, Netflix will be ‘coincidentally’ airing a new docu-drama mini series in August which posits the spurious idea that America is instead secretly controlled by a powerful Christian cabal:

Each February, guests from around the world gather for a blessing organized by the subjects of The Family. Those guests have included every US president since Dwight Eisenhower. The new docu-series gives a firsthand look into The Fellowship, the organization behind the National Prayer Breakfast, that’s long been shrouded in secrecy.

Directed by Jesse Moss and executive produced by Oscar winner Alex Gibney, the five-part series looks at the tactics used by the organization to exert influence around the globe.

Jeff Sharlet, writer of The Family: The Secret Fundamentalism at the Heart of American Power, is a former member of the organization and gives his firsthand account for the docu-series that also includes reenactments.

“In my 20s, I stumbled my way in,” Sharlet says in the trailer above. “And what I found is a secretive Christian organization called The Family that have been hiding in plain sight for over 80 years.”

“The Family grooms and supports leaders, teaching them that the Bible is a story about power, not mercy—that leaders are chosen by God, not elected,” Netflix said in a press blast.

In the trailer above, get a taste of what the new series is about, specifically its hard look at Doug Coe, associate director of The Fellowship. “He’s the most powerful man in Washington you’ve never heard of,” a voiceover in the trailer says.

Described as part investigation and part personal journey, the series will look at The Fellowship’s involvement in various political scandals and how it works with the current administration.

Reading this review, one might be tempted to assume that the writer of this series, Jeff Sharlet, is a Christian, but that would be a huge mistake.  In an essay he wrote about the jewish writer, Isaac Bashevis Singer, published in The Forward, Sharlet counts himself among other jewish writers whom he describes as:

“But Jewish writers are, for the most part, a “pornographic, paranoid, freakish” bunch. I am thinking here of the various Roths and Hoffmans and Grossmans and Goldbergs, not to mention Ginsberg, Bruce and Bukiet, Shteyngart (“filthy immigrant bear,” self-named), Goldstein (just plain filthy) and Ozick (most brilliant pornographer of all), plus the legions of lesser smut writers, poison pens and naysayers among whom I am proud to be numbered. We know better. Singer’s demons are as real and numerous as our own lusts and envies and vanities and voyeurisms and perversions, inversions, reversions, as real and quick and clever as our pettiest deceptions, the ones we thank God for granting us, lest we run out of stories.”

This is the man you can trust when he tells you that a secret, powerful Christian cabal controls our politicians at the highest levels in America.  If this Christian ‘cabal’ is so powerful, why can’t they get a Christian cross erected on the White House lawn at Christmas, but your fellow Jews have no problem getting their monstrous menorrah put up every year?  Why does every elected politician have to attend the annual AIPAC meeting or risk losing their funding?  Why is President Trump supporting legislation to make criticism of Jews and Israel illegal, but no such legislation against criticizing those powerful Christians who control him?

As Shalet freely admits, America is controlled by demons, but from his description of them, they have a decidedly Yiddish flavor:

“The dead [Isaac] Singer reminds us of are our [sic] dybbukim, spirits that possess us. They rip books from our hands and hurl them at the goyim; they transport us to grotesque reveries and inspire us to record and reproduce the sins that are the fathers and mothers of a million bastard spirits. Yiddish may be a subject for nostalgia, but its demons are alive and well in America. They live on, as Singer wrote, in the curves and crooks of the letters with which we make words to describe them.”

The Family_ It's Not About Faith, It's About Power _ Official Trailer _ Netflix