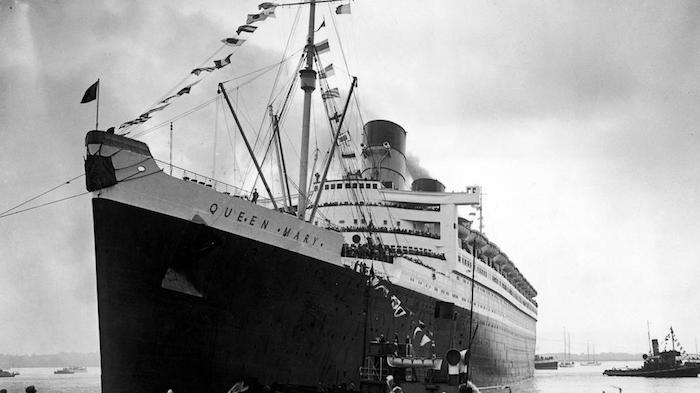 A senescent Jew — an RAF WWII vet — appears to have fabricated an improbable jewish revenge fantasy about captured Nazis during WWII which allegedly occurred on board the Queen Mary ocean liner when it was being used as a troop and munitions transport:

In September 1943 when I was in the RAF, and posted to Canada via New York, to continue my flying training, I was witness to a dramatic incident.

We were crossing the Atlantic on the Queen Mary, then the largest ship afloat, weighing over 80,000 tons. The QM was a very valuable weapon to the Allies, as it was equipped as a troopship, and when necessary could carry as many as 20,000 troops at a time, although on this occasion there were only about 2,000 of us…

On board as well as the British was a mixed bag of allied servicemen, Free French, Belgians, Norwegians Dutch, in a variety of uniforms as well as several hundred German paratroopers still in their paratroopers’ overalls and helmets, recently captured in Tunisia. They were escorted by a small US Army unit, on their way to POW camps in America.

The Germans were elite troops and from their arrogant and aggressive demeanour seemed to feel this was a temporary inconvenience which would end shortly when they had won the war. They were locked in the capacious hold of the ship…

The ship had a small well equipped synagogue, seating about 40 or 50 persons, a left- over from its peacetime voyages. As it was Rosh Hashanah, all the Jewish servicemen aboard were excused most duties, and we all met up in the little synagogue to celebrate the New Year.

We were lucky to have a generous extra supply of tinned food including gefilte fish, pickled cucumbers, wine and other un-military goodies supplied by the American Jewish Congress. In short we had a homely celebration in a potentially dangerous situation.

The US captain promptly went down to the hold and dragged out half a dozen of the elite Nazis, collected scrubbing brushes and other cleaning equipment, brought them to the upper deck and made them scrub the synagogue out, polish everything in sight to his satisfaction and then repeat the performance.

This went on twice a day until we arrived at New York. They were literally on their knees scrubbing around our feet, and those unrepentant thugs knew very well what they were cleaning. We made it clear that we were Jews in uniform, and the situation on mainland Europe was dramatically reversed for a few precious hours.

I still remember vividly the vicious looks they gave us. One was scrubbing on his hands and knees around my feet where I was sitting. Our eyes met for a moment, and I felt a twinge of fear which I hope I concealed. None of them uttered a word of complaint. It was a satisfying thought that in 1943 we had made some Nazi paratroopers scrub and thoroughly clean a synagogue. Most of us were barely 20.

Clearly, most of this incident probably never happened except in this doddering old Jew’s foggy mind.  He’s obviously seen too many Hollywood WWII fantasy films like Schindler’s List and Inglorious Bastards, which have inspired him to compose his own action-packed revenge story to impress gullible children.

There are so many details in his improbable story that are clearly false that it’s not worth addressing.  This incident allegedly occurred long before any Jews knew about any alleged “atrocities” committed by Germans in secret during WWII, and which didn’t come to light until after the war.

After the war the Jews rewrote history to make it all about them in retrospect.  And they did so often embellishing their unchallenged tales with Hollywood-like cartoon characters and story lines, courtesy of Billy Wilder, which Mr. Posner has soaked up like a sponge.