Jews Are Asking: Is There A Culture Of Rape In Israel? 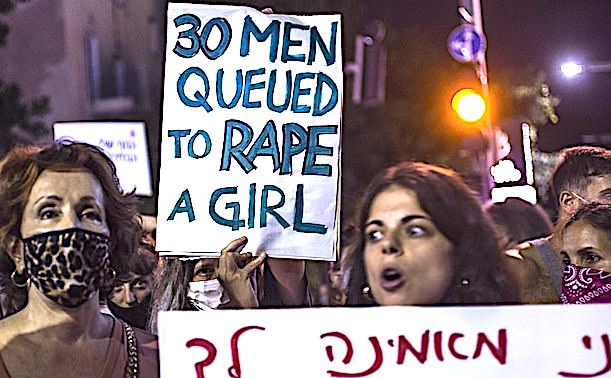 After two major publicized incidents of gang rape involving Israeli youth and adult men — most recently one where 16 year old Jewish girl was raped by over 30 males — Israelis are being forced to confront a terrible reality: is there a culture of gang rape in Israel?

Some weeks have passed, but the shocking gang rape of a 16-year-old girl in Eilat that was reportedly committed by dozens of boys and men ranging from age 16 to adults in their thirties continues to galvanize the Jewish state, causing many pundits to ponder the sociology behind this horrific crime. With school starting this week, educators are trying to see where things went wrong.

Some have pointed to the common practice of underage Israelis renting hotel rooms by themselves, without any sort of parental supervision. Others blame the existence of a permissive mentality claiming “boys will be boys,” which led to some Israelis granting a hero’s welcome to a group of 12 Israeli youth, who were accused of gang raping a woman in Cyprus and then were acquitted (as it was consensual – as if that made it alright.).

I believe that there are deeper issues at play that culminated in the brutal Eilat gang rape than those mentioned above.

Since 2014, the Association of Rape Crisis Centers in Israel has documented 250 gang rapes in the Jewish state per year (both Jewish and Arab). 55% of these gang rapes are perpetrated by teenagers. Furthermore, 63% of rapes in Israel were committed by boys age 12 to 18, while only 37% by adults over age 18. This makes one ask, what is happening to Israel’s youth that makes them likely to rape and gang rape women and girls? Is a rape culture developing among the nation’s youth?

Dr. Anat Gur, the CEO of Women’s Wisdom Center, claimed that many young Israelis today are exposed to pornography – although there are ways to censor the web on home computers and smartphones – that presents a plan of action for rape, as it portrays women as “objects, as if they are portraying bizarre and degrading acts and desires.

“It is clear that Israeli society is in a constant state of war, that the army is strong, that there are many hierarchal structures like the army and the police, and there are [societal] groups where the control of the father is strongly felt,” she added. “Once women and girls are presented as a commodity worth money, it affects all women and girls in the society, not just those that are in prostitution.”

Orit Sulitzeanu, director of the Association of Rape Crisis Centers in Israel, declared that there is a huge vacuum in the Israeli educational system: “These kids did not get any education about what is consent and what is a good sexual relationship and what is abuse. In Israel, it is not compulsory to learn about unhealthy sexual behaviors. If it were compulsory, maybe we would see less cases like that. We wrote a national program to educate against sexual violence to teach young kids what is appropriate sexually. We want to put it into place.”

However, it has not yet been put into place. This means that unless the average young Israeli learns to respect women and girls from his home environment, he will not learn this crucial life skill.

Changing the educational system to include sexual ethics may not be enough to change what is going on. Dr. Gur added that if a child does not learn to respect women and girls at home, what he learns at school may not be able to undo that: “The power of the educational system is limited. If a child sees at home norms of moral debasement, humiliation, consumption of prostitutes, pornography, etc., it may prevail over one’s education.” In less extreme words, if a child does not see love and respect at home, that can have a catastrophic effect upon the greater society…

Furthermore, there is not a single ministry devoted to combatting Violence against Women despite it rising greatly during the pandemic and no specialized court dedicated solely to prosecuting sex crimes. The educational system is stressed-out financially and resource-wise, and this effects the ability to direct resources towards additional any programs, including one dealing with sexual ethics.

All of the above could lead to the development of a rape culture among the country’s youth if concrete action is not taken to correct it.

In 2016, Rabbi Steven Pruzansky was castigated and hounded by feminists and progressives when he addressed the issue of campus rape, writing:

Here’s a novel idea, one that has been tried before with great success but has fallen into desuetude, apparently, on college campuses. It will solve all these problems, the “rape culture,” the “he said/she said,” the feelings of rejection by the party who had an emotional connection with another person who just sought a physical connection. It’s called… abstinence, self-discipline, or chastity. It involves waiting until marriage to engage in intimate acts, and then in a relationship in which the couple genuinely loves each other. It is preceded by a joyous ceremony known as a wedding, which too involves contractual obligations that are grounded in mutual respect. Problem solved…

…The complexity of this issue and its centrality in building a healthy society is one that Israel’s entire religious education system, both Zionist and haredi – as opposed to the situation described in the beginning of this article – is aware of and consciously addresses halakhically and morally. Religious teens are taught to observe preventive Torah laws prohibiting physcial contact with the opposite sex and those prohibiting being alone in a closed space with someone of the opposite sex before marriage and mandating modest dress and behavior, all with the goal of teaching respect for women and elevating sexual relations to intimacy between committed partners.

Notice how Jews skate around the problem — putting the responsibility on the ‘patriarchy’, government and schools — as if Jews need to be “educated” not to rape or gang rape — which is a tacit admission that the morality is not written in their hearts (Romans 2:15, Jeremiah 31:33), it is NOT an implicit part of their nature — more proof they cannot be true Israelites.

Clearly, there is an epidemic of sexual perversion in Israel — pedophilia, rape, and human trafficking are all too common in Israel today, and most perpetrators are given slaps on the wrist.

But this problem isn’t confined to Israel — Jewish men worldwide are often at the forefront of scandals involving the sexual abuse of women and underage girls — and boys..

The so-called “MeToo” Movement was dominated by powerful and wealthy Jewish men — and this is not some ‘antisemitic’ canard — Jewish ‘comedian’ Larry David joked about it Saturday Night Live (see below).

A Jewish fraternity in Scotland was recently embroiled in a rape scandal that was quickly swept under the rug.

This is the kind of deviancy that was rampant in the Jewish-dominated Weimar Republic in the run up to WWII — and National Socialists came to power as a direct reaction against this culture of perversity.

Rape was also epidemic among the Jewish Bolsheviks in Russia, and when they swept west through Europe at the end of WWII, they raped every German woman and child they could lay their hand on.

No amount of “education” and “government programs” will change what’s in the Jewish heart.