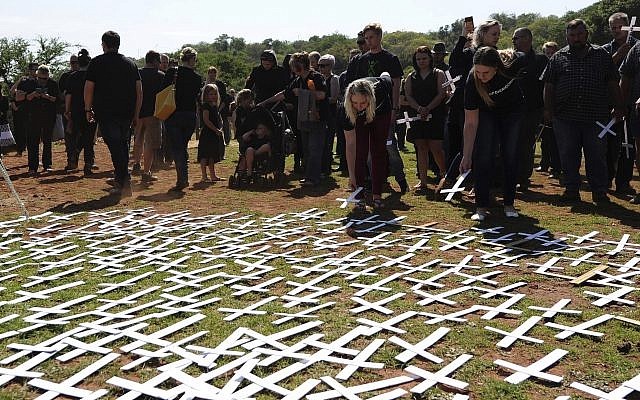 For the last 50 years, Jews have been working feverishly to undermine and destroy the Whites living in South Africa, and they are not about to see their efforts being undermined even by the President of the United States:

US President Donald Trump has come under fire, including from the Anti-Defamation League, for apparently tweeting support for a white nationalist conspiracy theory that whites in South Africa are in danger of genocide.

…In a statement, the ADL said it was “extremely disturbing that the President of the United States echoed a longstanding and false white supremacist claim that South Africa’s white farmers are targets of large-scale, racially-motivated killings by South Africa’s black majority.”

The ADL also said that white supremacists in the United States have made such claims for years.

…Experts say the attacks reflect the country’s generally high crime rate and that there is no evidence connecting them to victims’ race.

“People are not being targeted because of their race, but because they are vulnerable and isolated on the farms,” said Gareth Newham, head of the crime and justice program at the Institute for Security Studies in the capital, Pretoria.

“We are going to take back the land and we’ll do it by any means necessary,” said Lindsay Maasdorp, national spokesman for Black First Land First, a group that condones land seizures in South Africa.

South Africa’s also lashed out at Trump over his remarks.

…For years, a small but vocal group of white South Africans have claimed white farmers are the target of violent, racially motivated farm attacks.

Experts say the attacks reflect the country’s generally high crime rate and that there is no evidence connecting them to victims’ race.

AfriForum, a group that represents some white South African interests, welcomed his comments. In May, its leaders went to the US to lobby institutions and politicians about Ramaphosa’s proposal to expropriate land and the alleged targeting of white farmers.

AfriForum and other critics say the government’s proposal to expropriate land without compensation could lead to economic disaster, pointing to the collapse of the agricultural sector in neighboring Zimbabwe after the government of former President Robert Mugabe began seizing white-owned farms, sometimes violently, in 2000.

Proponents of South Africa’s policy, including Ramaphosa, say it is necessary to address historic injustices and can be done in a way that is lawful and will not compromise the beleaguered economy or food security.

It should not surprise anyone that Jews would side with the communist Blacks in South Africa — and deny the true extent of the violence against Whites — because it was Jews in South Africa who aided and abetted the ANC from the very beginning, which we pointed out here.

And the Jews will smear anyone who defends the Whites in South Africa as a “Nazi” or “White supremacist”.   And there are Jews in the American government and media poised to attack anyone who wants to help the Whites, including offering them political asylum in America.  Helping Whites is a form of “hate” and will not be tolerated.