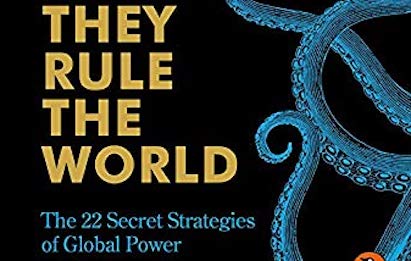 Due to pressure from powerful jewish advocacy groups, a major British publisher has ceased producing copies of a book by a Spanish author which critics allege contains “antisemitic conspiracy theories” such as the Rothschild banking dynasty having  enormous global influence:

Penguin Random House UK on Thursday announced it would no longer print and ship Pedro Baños’ “How They Rule the World: The 22 Secret Strategies of Global Power,” which was published in English in April by Penguin subsidiary Ebury.

The decision follows an external review of the book that Penguin initiated after it emerged that the translation to English by Ebury omitted a chapter that appears in the Spanish-language original, and deals with the Rothschild banking family.

Jeremy Duns, a British author, raised the inconsistency on Twitter. He drew attention to the book cover, which bears an image of octopus tentacles.

The Rothschilds are the subject of countless anti-Semitic conspiracy theories. Octopuses have been a common element in anti-Semitic imagery, including that of the Nazis.

Penguin initially defended the book but decided to limit its dissemination after the review they called, headed by a British Reform rabbi, determined that the Spanish text is “carrying echoes of Jewish conspiracy theories,” as her report said.

About 3,000 copies of the English translation have been printed and 500 sold so far, according to The Guardian.

As the old adage goes, ‘He who has all the gold makes the rules,’ but apparently that’s true only if you are not talking about Jews.

The list of banks owned or controlled by the Rothschilds speaks for itself, but apparently this list “proves nothing” — and is probably just a “coincidence”.

If we are to believe the jewish-controlled press, the owner of Amazon, Jeff Bezos, is the “richest man in the world,” while the

The Jewish Rothschild Dynasty is never mentioned on any of those “Richest” lists, so they must not be as rich as everyone seems to think — and to believe otherwise makes you an antisemitic “conspiracy theorist.”

But it’s “antisemitic” and “hate” only when an octopus is used to illustrate Jewish power for some strange reason.

“Jewish power” is an age-old antisemitic “smear” — and to prove it’s not true, they will throw you in jail in many countries if you dare state this “canard” publicly.