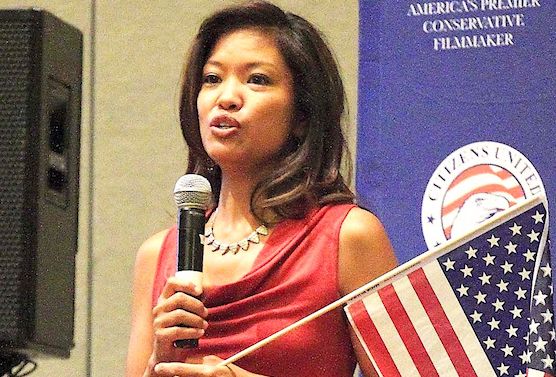 Prominent jewish conservatives — whatever that means — have rebuked right-wing pundit Michelle Malkin, who spoke at an event last week hosted by anti-Semitic and alt-right figures, where she dared to question the definition of  ‘antisemitism’:

Already right out of the gate, before I even knew who Nick Fuentes was, before I knew who Groypers were, I was being tarred as an anti-Semite. It’s become a useless, meaningless term and everybody knows it. And that’s why they’re so desperate to tar all of us as that.

Oh, and it is an unacceptably anti-Semitic to point out the rank hypocrisy of people who are fiercely protective of an ethno-state and an immigration enforcement system that works–who turn around and call those of us who believe, whatever our backgrounds are, who only have one homeland that they’ve ever known, to call us– what is it now?–“white majoritarianism” I believe is the term.” That’s me. Thank you.

Malkin has praised Fuentes as “one of the New Right leaders.”

Fuentes has a history of both anti-Semitic remarks and similar social-media posts.

YAF cut ties in November with Malkin as a member of the organization’s campus lecture program.

(((Conservatives))) on Twitter slammed Malkin for her AFPAC remarks.

“I’ve been reading Malkin for probably a decade, and I once admired her. This is disgusting,” tweeted National Review and New York Post writer (((David Harsanyi))). “I said a decade, but it’s probably more like two now that I think about it.”

“Michelle Malkin claims ‘questioning the numbers of the Holocaust’ isn’t antisemitic and neither is questioning the ‘dual loyaltie’ of ‘foreign agents,’” tweeted pro-Israel philanthropist and activist (((Adam Milstein))). “You read that right … ”

“The fall of Michelle Malkin should be leading the conservative movement to ask some uncomfortable questions of itself about how mainstream her views were … Has she changed? If not, what does that say about us?” tweeted conservative writer (((Bethany Mandel))), who linked her article about Malkin in Ricochet.

A ‘jewish conservative’ is a contradiction in terms, an oxymoron, as their knee-jerk, unquestioning support for Israel and the endless wars in the Middle East will ultimately destroy America, not ‘conserve’ it.

Jews on the political Right, even the extreme Right, serve as ‘gatekeepers’ to make sure that the largely non-jewish White electorate do not discuss the hidden jewish hand in the false Left-Right political paradigm.

But the identity politics that Jews love to push is now turning against them — that is, Michelle Malkin is Asian and married to a Jew, which makes it very difficult for any of these attacks on her to stick.

If Jews were as smart as they think they are, they’d let this matter drop down the memory hole, but they have never been known to ‘let well enough alone’, as Harry Truman discovered the hard way.