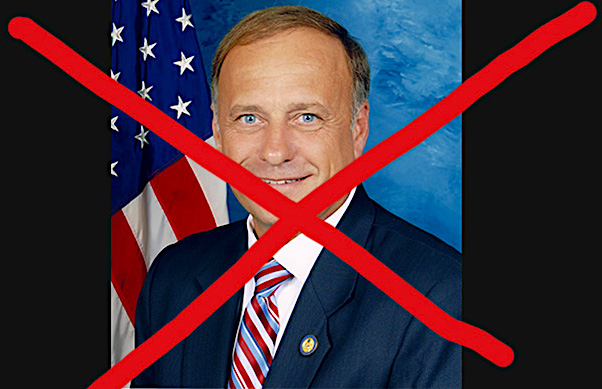 King had for years been criticized for his anti-immigrant views and remarks, but over the past few years had made an increasing number of steps toward outright white nationalism.

State Sen. Randy Feenstra, who defeated King in the primary, received $40,000 in donations from the Republican Jewish Coalition’s political action committee — a rare effort by the conservative Jewish group to unseat a Republican incumbent. “Steve King does not represent the Republican Party and it’s time for him to leave Congress,” RJC executive director Matt Brooks said in a statement. “We are happy that Randy Feenstra, a strong conservative and a friend of Israel, will be our party’s candidate for Congress in Iowa’s 4th district seat this year.” (Full disclosure: I interned for the RJC for a college semester).

King has a long rap sheet of controversial statements and actions. In the summer 2018, he retweeted a British neo-Nazi and refused to apologize over it. Later that year, he endorsed a white nationalist running for mayor of Toronto. During a visit to Europe that year funded by a Holocaust memorial group, King took a side trip to meet with an Austrian political party with longtime Nazi ties.

King narrowly won re-election that year, but the Republican Party decisively broke from him in January 2019 when, in a New York Times interview, he asked when “white supremacist” had become an offensive term.

King was removed from his congressional committees. His newfound lack of influence in Washington, rather than his controversial remarks, was the biggest issue for voters during the Republican primary this year, the Atlantic reported Tuesday.

Jews took over the Republican Party for good under Ronald Reagan — when the so-called Trotskyite “neo-conservatives” re-defined what American “conservatism” was going to be for the foreseeable future, as they laid the groundwork for the 9-11 attacks, which helped solidify their stranglehold on the corridors of power all over the American political landscape.

Anyone, like Steve King, who naively believes that White Americans should have advocates in Congress are NOT real Republicans and will no longer be tolerated by the Jews who control Capitol Hill.

But then again, when the biggest donor to the Republican Party is the radical Jewish Zionist, Sheldon Adelson, there will be no room for any candidate who is not an Israel-firster and shabbos goy.

By White standards, a “Jewish conservative” is a contradiction in terms, and any White conservative who thinks that ‘Republican’ Jews are going to ever be on their side politically is hopelessly naive.

The Jews are completing the process of literally purging Capitol Hill of any and all White politicians who aren’t willing to betray and destroy White Christian America.

But to claim that Jews have the political power to do so is an “antisemitic canard”.