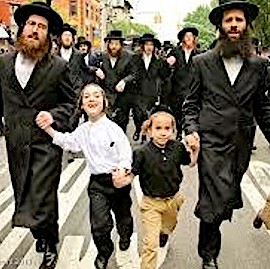 New York’s Metropolitan Transportation Authority is investigating a complaint by an ultra-Orthodox man who has alleged that a bus driver refused to stop for him at a New York bus stop in Brooklyn over the current measles outbreak:

The man said that the bus driver drove past the stop in the largely Orthodox-populated neighborhood of Williamsburg last week but that he caught up with it after it got stuck in traffic. The bus driver eventually let him on, covered her face with her sweater, and refused to accept the man’s transfer, while shouting “Measles! Go in!” the Brooklyn Paper reported.

The incident was reported to New York’s Metropolitan Transportation Authority on Thursday by the United Jewish Organizations of Williamsburg, which is working with the city to curb the measles outbreak by educating the community and encouraging vaccination, according to The Forward.

“The measles outbreak should not be used as an excuse for antisemitism,” the group said in a tweet.

A second tweet from the group added that: “Facts are, about 95% of the community is vaccinating. We, the Rabbis and community leaders, are working hard to increase it. Not justification to attack the entire community for the shortcomings of a few.”

There have been 285 reported cases of measles in Brooklyn’s Orthodox Jewish community since October, including 246 children. The Brooklyn outbreak has been tied to an unvaccinated child who contracted the disease during a trip to Israel, The Washington Post reported.

Rabbi David Niederman, president of United Jewish Organization, told the Brooklyn Paper that Haredi Jews in Williamsburg are being harassed on the streets with people shouting “Jews, measles” at them.

If we are to believe the ADL and the SPLC, and any other jewish ‘advocacy’ group, non-Jews are looking for literally any excuse to hate Jews.  Blaming Jews for the alleged measles ‘outbreak’ in New York must be traumatic for Jews who were also blamed for the bubonic plague that killed millions in the Middle Ages.  Even when reputable historians claim that the plague was spread by “rats”, the Jews kvetch that by “rats” what they really mean is “Jews”.

And when you combine general jewish paranoia with the paranoia of the pro-vaccine militants, you’re stirring up a cauldron of fear and hate. Who is a bigger “enemy of the people”, un-vaccinated children or Jews?  How about an unvaccinated Jew?  If you want to understand what it’s like to be treated like a Jew, just announce publicly that you or your children are not vaccinated.  The pro-vaccine people just might want to force you to wear a yellow star in public to warn others of your presence.  The lesson here is simple, goyim: you don’t need to use vaccines as an excuse to “hate” Jews.