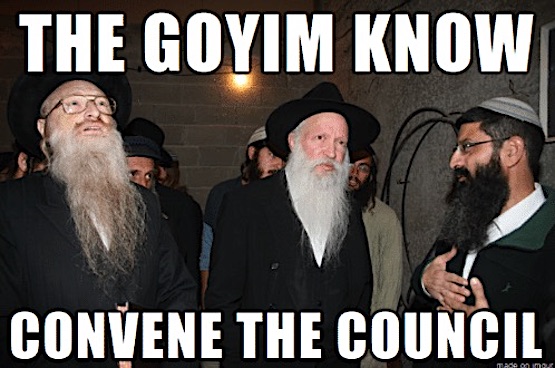 Now that White people are ironically using the derogatory Yiddish term ‘goyim’ to mock Jewish supremacists, Jews are now being advised to stop using it, at least in public, because apparently it’s making Jews look bad:

There is nothing inherently derogatory about the word “goy.”

In its original context, it means “nation.” In fact, the Scriptures teach us that the word “goy,” and its plural “goyim,” can be either positive or neutral. God promises to make Abraham’s descendants a goy gadol (Genesis 12:2) — a great nation. After the Exodus from bondage, God refers to us as a goy kadosh (Exodus 19:6) — a holy nation. And God instructs us that we are to be l’or goyim (Isaiah 49:6) — a light unto the nations.

While the origin of the word is benign, the pejorative overtone of the word goy is not new. Take, for example, the phrase, goyisher kop — a gentile head. Not a term for any non-Jew, goyishe kop refers to an “idiot.” Or the observation that “the goyishe groomsmen were all drunk and bawdy; of course, you’d never see that at a Jewish wedding.” The moral implication could not be clearer.

…Many of us have grown up using words like goy, shiksa, sheigetz, and shvartza as part of our Ashkenazic Jewish lexicon. To see these words for what they are, and how they have been used to dismiss entire groups of people, might make us feel as though we are losing part of the language that helps define us. And right now, for many, there is a genuine need to retain anything that defines us.

But do we really want to cling to words that marginalize and alienate other people? Is that how we want to be defined?

Context is, of course, everything. There can be non-pejorative uses of goy such as a goyishe restaurant — one that serves food that does not adhere to the kashrut standards and includes menu items that just don’t “seem Jewish.” Or, one might argue, that we need a word for us to refer to those who are “not-us.”.

There are some non-Jews who think that all of us use this word to describe them. Sometimes they believe that it’s a quaint honorific. Others, however, are under the impression that all Jews regard them negatively, and this plays out in an unexpected way.

Disturbingly, the white supremacists have co-opted it to refer to themselves in a shocking example of linguistic appropriation. By incorporating it, and other Yiddish terms, into their nationalist lingo, they perpetuate the anti-Semitic myth that we are a cabal with our own secret language and agenda. “The Goyim Know” is a catch-phrase used to mock Jews by using pseudo-Yiddish phrases to impersonate them by “exposing” the Jewish “ conspiracy. “Oy vey, it’s anudda Shoah” and “oy vey, the goyim know, shut it down” are just two examples often found on social media in comments and on memes.

Using the word goy in a news headline simply reinforces the “Jews run the media” and “Jews run the world” tropes. As though getting Bannon fired was all part of our sinister plot for worldwide domination.

Ultimately, however, it is our word. One with a historical use that is neutral, at best, and extremely offensive, at worst. And if we are to be allies with our non-Jewish friends, neighbors, and family members, it is time to eliminate it and other racially and culturally derogatory words from our parlance. Not because, as some have suggested, we want to be “politically-correct,” but because it is how we maintain God’s demand that we be goy kadosh — a holy nation.

The Jew who wrote this drivel, Rebecca Einstein Schorr,  knows very well that there’s a big difference between how it’s used in the Bible and how the average Jew uses it as a Yiddish slang.

“Goy” for White people is often the equivalent of the “N word” for Blacks.

And she even admits Jews use “shvartza” which is the Yiddish equivalent of the “N word”.

But she plays the rhetorical game here we often see with them — “Not ALL Jews use goyim as a slur.”

True, and not ALL Jews lie about the Holocaust.

Their sense of morality can be reduced down to the phrase, “But is it good for the Jews?”

And when the goyim know what the Jews are up to, like using this racial slur, it is not “good for the Jews,” which is why their Talmud advises that any of the goyim who reads the Talmud must be killed — it puts Jews at risk.

When the “goyim” wake up to these games that they play, we instantly are transformed into “antisemites”.