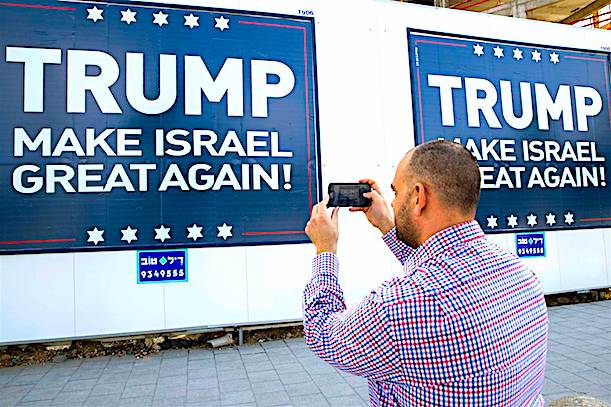 During a recent speaking event in West Des Moines, Iowa, to promote his new book, Donald Trump Jr. was interrupted by Elon Glickman, a jewish heckler from the anti-Israel group IfNotNow, who accused President Trump of hiding his real hatred of Jews behind his support for Israel:

“I’m an American Jew, and ever since your father was elected president, more and more Jews are being gunned down,” Elon shouted while approaching the podium.

As security personnel moved in and were pulling the heckler out of the room, the president’s son said, “I don’t think anyone’s done more for Israel and American Jews than my father.”

…Elon Glickman later tweeted: “They can drag me out but I’ll never stop fighting for Jewish people. Donald J. Trump Jr. spreads anti-Semitic conspiracy theories that are killing American Jews. He and the GOP can’t hide their anti-Semitism behind support for Israel. Jews are rising up to fight white nationalists.”

It’s wonderful to see Jews attacking each other for being antisemitic, proving that Jews really don’t know — and can’t even agree on — what antisemitism actually is.

But here we have a new jewish antisemitic conspiracy theory about gentiles: the only reason a gentile would support Israel is to create a smoke screen behind which they privately talk about how much they hate them and want to gas 6 million of them.

At the same time, Jews like Elon Glickman, who correctly believe that Trump’s unconditional support of  Israel’s genocidal imperialism puts all Jews in the world at risk, are written off as ‘self-hating antisemitic Jews’, whatever that is.

Even the philo-semitic, politically-correct Swedes have noticed an uptick in antisemtism whenever Israel bombs Gaza because a Palestinian child threw a rock at an IDF soldier.

No wonder Jews have such a high rate of schizophrenia.