Jews Complain About Germans Who Protest Migrant Murders and Rapes 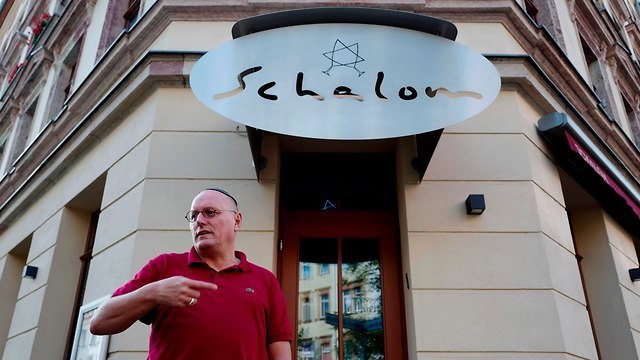 A suspicious alleged attack on a kosher restaurant in Germany sparked Jews to complain about the “far right” protesters who are speaking out against migrant violent crime:

An attack on a kosher restaurant by masked neo-Nazis on the sidelines of an anti-migrant protest in an eastern German city shows there’s a deep problem with right-wing extremism in the region and should be treated as a call to action, the head of Germany’s Central Council of Jews said Sunday.

Josef Schuster, who had previously condemned the violent far-right protests in Chemnitz on Aug. 26 and 27 before the attack on the Jewish restaurant was even known, said “we need to call the problem by its name.”

“The racist riots and the attack on the kosher restaurant in Chemnitz show how strongly rooted right-wing extremism is in the region,” he said.

Hundreds of protesters took to the streets after a German man was stabbed and killed Aug. 26 after authorities say a verbal argument with migrant men escalated. An Iraqi and a Syrian have been arrested on manslaughter charges. That day several foreigners were injured after authorities said they were attacked in the streets.

The next night, around 6,000 far-right protesters including neo-Nazis, members of the anti-migrant Alternative for Germany party and others clashed with counter-demonstrators. On the sidelines, masked protesters attacked the Shalom restaurant with rocks and bottles, injuring the owner while shouting “Jewish pig, get out of Germany.”

The unrest following the killing has focused new attention on Chancellor Angela Merkel’s decision three years ago to allow hundreds of thousands of refugees into the country, straining its resources and hospitality beyond what some Germans considered acceptable.

Anti-migrant sentiment has been particularly strong in Saxony, the state where Chemnitz is located. The nearby state capital of Dresden is home to the group Patriotic Europeans Against the Islamization of the West, or PEGIDA, and the Alternative for Germany received almost a quarter of the vote in Saxony last year.

This alleged attack on a jewish restaurant–in all likelihood–never happened.  The incident sounds like something out of a bad Steven Spielberg movie where Nazis are portrayed with the subtly of a Sherman tank.

Jews have been caught lying about so-called “hate crimes” since time immemorial–and it would be consistent with jewish tactics to send in a masked agent provocateur of their own to make such threats against one of their own–so that they can discredit the peaceful street protests who oppose their pro-migrant agenda.

The official narrative promoted by the jewish media is that all “right wing” protests are violent and antisemitic.  Whenever White people protest–or even object to–the progress of the jewish agenda, they must be stopped because it could lead to another Holocaust.  In fact, if you even notice that someone is jewish and dare to point out that fact, it could lead to another Holocaust.

So in order to avoid another Holocaust, we must never criticize Jews for anything–or even acknowledge that they exist.