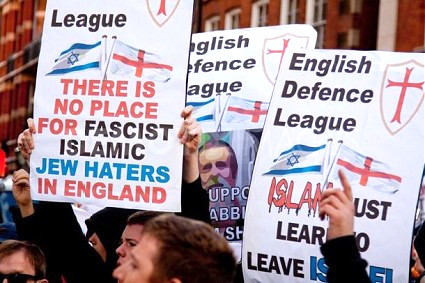 Far-right websites that rally to the cause of former English Defence League leader Tommy Robinson are littered with the same antisemitic dog-whistles used by neo-Nazi Robert Bowers, who carried out the Pittsburgh atrocity.

Name-checking the Jewish billionaire philanthropist “George Soros” and using the term “globalist” to describe an establishment conspiracy has become a core tactic for far-right extremists.

British supporters of organisations such as the Democratic Football Lads Alliance and users of pro-Tommy Robinson news-sites such as Rebel Media and The Reality Report also use similar language on broadcasts and internet chat rooms.

The JC discovered a video published by The Reality Report — a hugely popular news site for far-right supporters in the UK — which included attacks by one individual named Celtic Warrior on the “Zionist-created leftist movement that despises traditional Christian family values and morals”.

The post appeared underneath a report alleging that the Metropolitan Police “mishandled” a march on October 13 by the Democratic Football Lads Alliance, which was quoted stating that attacks on the march had come from “George Soros-financed Communist thugs.”

While much of the content revolved around the claim that Muslims have destroyed traditional English culture, it was also made clear that the Jews or the “Globalists” were held largely to blame.

The Rebel Media has regularly featured videos filmed by Robinson, a convicted criminal. It also includes a post stating: “The leaders should be hung for treason for flooding Europe with Muslims on purpose to create a culture clash!! They did it deliberately and it’s part of the globalist new world order agenda!! Fight!! Fight!! Fight!!”

Rebel Media contributor Katie Hopkins, who was dismissed from LBC radio last year after calling for a “final solution” to Islamic terrorism, came under fire this week for tweeting about Pittsburgh: “Look to the Chief Rabbi and his support for mass migration across the Med… There you will find your truths.” She later deleted the tweet.

But there was also debate on Rebel Media about the legitimacy of Robinson himself, a former BNP member.
Several far-right supporters cited Robinson’s claim to be pro-Israel. One wrote: “Tommy Robinson isn’t his real name.

They want a race war for martial law. Destruction of white nations. Don’t fall for it! Get rid of the Jews like the last 100 countries did that threw them out!”

Another added: “Tommy is a Zionist which means he’s supports anything Israel does including murdering unarmed innocent children at a protest… All you need to do is look at the countrys surrounding so called Israel and it all becomes clear. They’ve all been bombed and basically wiped them out until they can install one of their puppets that’ll go along with their agenda, it’s called The Greater Israel Project. It’s absolutely sickening to see.”

Basically, these “leftist” Jews are complaining that Tommy Robinson’s “right wing” jewish financiers and handlers aren’t doing enough to purge antisemites from Robinson’s supporters.  Despite the fact that Robinson openly panders to the Jews and Israel, he nevertheless still attracts antisemites, anti-globalists, and anti-Zionists.  Clearly, something needs to be done to rid Robinson’s ranks of these goyim who understand the game that’s being played on them.

The fact is that Robinson isn’t even anti-Muslim — he’s merely against certain Muslims who gang rape little White British girls, but those type of Muslims account for only a small fraction of the Muslims in England — according to Robinson, the non-raping Muslims are fine.  So basically, Robinson supports 98% of the Muslims living in England — and how that equates to him being a British “nationalist” or him “defending the English” is a mystery to everyone except the Jews, who are the ones who have created the walking contradiction that is Tommy Robinson.