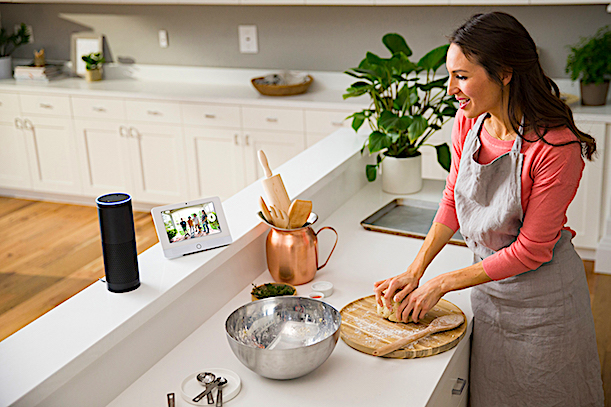 Despite the fact that Amazon’s AI Alexa robot has been shown to promote the agenda of the Radical Left, otherwise Liberal Jews are now up in arms that this otherwise compliant and politically-correct “useful idiot” has a firm grasp of the obvious — that Jews do indeed control the world financial markets and mainstream media:

The vice-chairman of Conservative Friends of Israel has written to the Home Secretary raising the alarm at claims the Amazon’s robot assistant Alexa is repeating quotes from antisemitic conspiracy theory websites.

In his letter to Priti Patel, the MP Andrew Percy writes that to the question “Do the Jews control the media?” Alexa answers, “Here’s something I found from the article Jew Watch on Wikipedia.  Jew Watch claims that Jews control the world’s financial systems and media.”

He also points out that in response to the question, “Do the Elders of Zion control the world?” Alexa quotes from an article that outlines “viciously antisemitic” theories regarding the forged documents.

The letter includes further examples of Alexa’s responses to questions such as “Was the Holocaust a hoax?” and “Is Israel guilty of war crimes?”.

Mr Percy states: “I was deeply alarmed to learn recently that the cloud-based Amazon ‘Alexa’ voice service responds to various questions about Jewish people, the Holocaust and the State of Israel by quoting antisemitic conspiracy websites and using selective quotes from others sources which are misleading without further exploration.

“Given that there are likely far more examples, I would urge you to call in Amazon to discuss this – I would be pleased to join you – and immediately investigate how these voice services select their material and sources.”

This entire brouhaha arose because the Jews at Wikipedia felt a need to post an article about the defunct website JewWatch for the sole purpose of discrediting it — a common Jewish tactic that always ends up causing unintended blowback.

Jews recently complained that Arthur Butz’s seminal book on exposing the contradictions of the official “Holocaust” narrative, The Hoax Of The 2oth Century, would be available in time for Christmas in Iceland — free advertisement for the book.

The made the same mistake recently by promoting Martin Luther’s The Jews And Their Lies by merely complaining about it — thanks to the Jews’ inability to leave well-enough alone, millions of new people now know about Luther’s most important book.

This mania to call out every single instance of “antisemitism” — no matter how trivial — is based on the spurious premise that the so-called “Holocaust” started with an antisemitic remark that wasn’t “called out” — a preposterous and paranoid notion.

The greatest historian of World War II, David Irving, rightly pointed out that Jews themselves were responsible for being rounded up and put in concentration camps — they are also responsible for lying about what happened to them when they were there.

And the more they try to suppress those who dare question the official “Holocaust” narrative — the more skeptics they will create — and the more emboldened Jews will be to lie about it.

All their efforts to control everyone’s thoughts and actions will merely bring about their ultimate undoing.