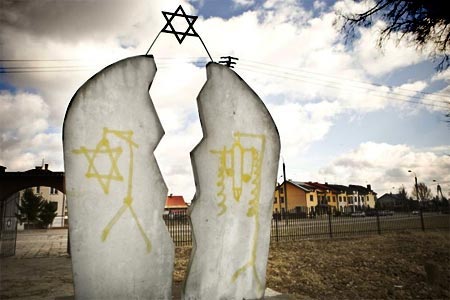 Jews claim that Poland has again collectively kicked “Polish Jewry” by building a new sports complex on land that allegedly was the site of a former jewish cemetery:

Jewish groups have reacted with fury after a sports complex was built on the site of what they claim is a former cemetery in the Polish town of Klimontow.

Local authorities built a basketball court and football pitch on the site.

The complex, which reportedly received more than $90,000 in government funding, was opened at the beginning of September, causing an uproar among the Jewish community who claimed that the town had been inhabited by Jewish residents before the Holocaust.

The head of the World Zionist Organization, Yaakov Haguel, said that the construction of the sports venue is “a kick delivered to Polish Jewry,” adding that he holds the Polish government responsible.

“The Polish government must respect Jews as it does any other citizen. Such events must not be allowed to recur in Poland and beyond,” Haguel said.

Meir Bulka, an Israeli Holocaust commemoration activist, expressed confidence that the town’s municipality knew about the location of the cemetery as they would have found graves while constructing the complex.

“They laid down piping there. There is no doubt they encountered graves,” he said.

Rabbi Avraham Kriger, the director of the Shem Olam Holocaust Museum in Israel, said that the building of the complex was “deeply offensive to the Jewish People.”

Old Christian cemeteries get moved or built upon — by jewish land developers — on a regular basis, but no one claims that Christians are being “kicked” by Jews when it happens.  But Jews have made it clear that they are special and reserve the right to be “deeply offended” by anything the “goyim” do that can be twisted into a random act of antisemitism.

By law, if the construction workers come across graves, they are supposed to stop work and resolve the issue.  That no graves were found during construction is clear — but the Jews acts as if the Poles are lying — that they found clearly-marked jewish graves and desecrated them anyway “just because they hate Jews,” apparently.

Do Jews really believe their own hysteria?

How do they get anything done in the day when they spend so much of their time being “deeply offended”?