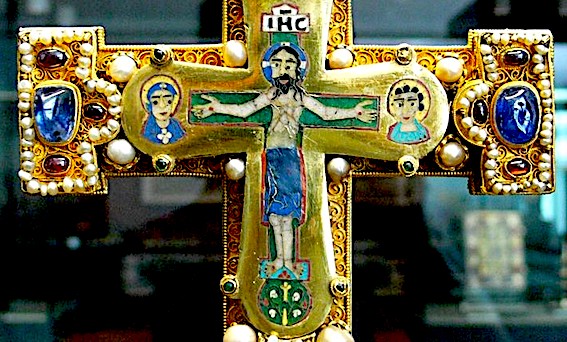 A bipartisan group of lawmakers is raising concerns over efforts by the German government to petition the Supreme Court to dismiss a case involving property legally purchased from Jews by the Nazis in 1935:

In a strongly worded letter to German Ambassador to the U.S. Emily Haber, members of Congress expressed concern about Berlin’s petition to the Supreme Court in relation to more than half of the famed Guelph Treasure, a collection of more than 80 pieces of medieval art. The German government has argued that it cannot be sued under U.S. law over the pieces, sold in 1935 by a collective of Jewish art dealers to Nazi agents, and now displayed in a German museum.

Heirs of the items’ Jewish owners are suing in U.S. court to recover the 42 pieces of art, arguing that they were sold under duress for far less than their true value.

In their letter, the representatives — including Reps. Jim Banks (R-IN), Abigail Spanberger (D-VA), Elaine Luria (D-VA), Josh Gottheimer (D-NJ) and Debbie Wasserman Schultz (D-FL) — express concerns about the German government’s arguments in the case, claiming that suits over stolen property during the Holocaust are permitted under U.S. law.

The letter highlights concerns regarding the German brief filed in the case, which argues in part that the transfer did not occur under duress and that the forcible seizure of artwork does not constitute an act of genocide.

“We are concerned that the brief your government has filed has attempted to distinguish the forced sale of the cultural artwork collection in question from ‘expropriation’ under international law,” the letter reads. “Putting aside the legal argument… your government seems to be arguing that forced sales of art to the Nazi regime do not constitute takings at all and that the definition of genocide does not include… the full elimination of Jews from German economic life starting in 1933.”

“The brief your government filed seems to suggest that genocide is understood as involving infliction of physical killing and harm, but not economic crimes,” the letter continues. “This is deeply concerning.”

The letter seeks to “reiterate the U.S. Congressional record on the Holocaust and genocide more broadly,” Spanberger said in a statement. “As the international community continues to work toward justice and to educate people of all backgrounds and generations about the Holocaust, it is important that we recognize the full-scope of systemic persecution that took place.”

In a statement to JI, Banks expressed support for the families suing the German government.

“The U.S. Congress can’t give back the millions of lives taken during the Holocaust and it can’t come close to righting Nazi Germany’s wrongs, but we can do our part to give the victims’ ancestors back a small part of what was stolen from them,” he said.

If economic crimes could be construed as “genocide”, then Jews surely have been the greatest perpetrators of genocide the world has ever known.

But, of course, Jews, in their own minds at least, are the world’s eternal victims — even when the Jews are stabbing you in the back, as the old Polish proverb suggests.

In it’s proper “historical context” then, organized Jewry attempted to commit genocide on the entire German nation in 1933 when it declared economic war — an international boycott — against Germany simply because they didn’t like German economic reforms that criminalized Jewish hucksters and speculators who had destroyed the Weimar economy.

And Germany could have simply confiscated all Jewish property before deporting them all — but they didn’t do that — they actually made an attempt to give Jews fair market value for property, such as the historic Guelph Treasure of German Medieval art that belonged in Germany.

That was apparently an “act of genocide” — for inadequately compensating Jews for their trove of ill-gotten Christian artifacts.

Compare that to a real genocide that Jews actually did commit — the murder of 60 million Christians in Russia — and not one survivor of that Jewish Bolshevik bloodbath has ever received one slim dime in compensation.

And considering that Jewish banker Jacob Schiff financed the Bolshevik Revolution, it’s only fitting, by Jewish logic, that the vastly wealthy Schiff family today, should perhaps offer — or be forced — to pay reparations to all the families in Russia with living descendants of that Jewish Terror.

We won’t hold our breath.