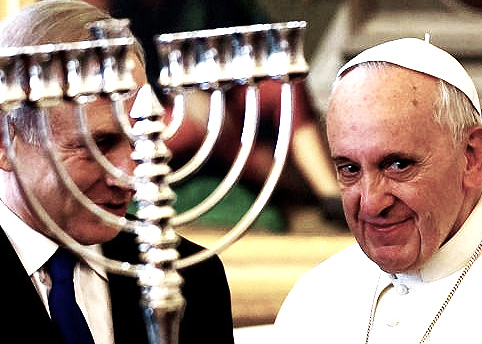 Pope Francis is being “urged” by jewish “experts” to back off from criticizing the “hypocritical” Pharisees, a stereotype that Jews believe has fueled centuries of bad blood between Catholics and Jews:

Catholic-Jewish relations blossomed after the Second Vatican Council — which in 1965 finally urged respect for Judaism — and Francis is a clear friend of the Jews, insisting the Church continue to apologize for anti-Semitism.

But for centuries, Jesus’s Jewish origins were obscured and the Jews were held collectively responsible for his death.

And the pontiff’s tendency to quote directly from New Testament passages where Jesus slams members of the small religious and political group as “hypocrites” has been troubling rabbis concerned about anti-Semitism.

Some 400 Jewish and Christian Bible scholars gathered in Rome last week to exchange research notes on the Pharisees, a group about which little is known historically but which came to represent all Jews in Catholic tradition. To Jews, the Pharisees include some of the earliest of the Sages whose collective legal and spiritual debates over some seven centuries, until the fifth century CE, are recorded in the vast compilation called the Talmud, Judaism’s central post-Biblical text.

But the image of the “treacherous” Pharisees appears down the centuries in dictionaries, academic articles, films and Protestant and Catholic preaching, with the word “Pharisee” becoming a synonym for hypocrite in the West.

“They lacked life. They were, so to speak, ‘starched.’ They were rigid… The people didn’t matter to them: The Law mattered to them,” Francis said of Pharisees in a homily in October.

The 110-year-old Pontifical Biblical Institute, headed by Jesuits, organized the Rome conference and helped write a speech Francis delivered to the participants Thursday in which he acknowledged the dangers of quoting the Bible without context.

“The word ‘Pharisee’ often means ‘hypocritical’ or ‘presumptuous’ person. For many Jews, however, the Pharisees are the founders of Rabbinic Judaism and therefore their spiritual ancestors,” the Argentine pontiff said.

“History has favored negative images of the Pharisees, despite there not being any concrete basis in evangelical narratives,” he said, describing the stereotype as “one of the oldest and most damaging.”

Francis asked the experts to carry on with their research in order to arrive at a “more accurate vision of this religious group,” which will contribute to “combating anti-Semitism” and “overcoming old prejudices.”

He also admitted the Pharisees should be referred to “in a more appropriate way in teaching and preaching.”

According to Rabbi David Rosen, director of interfaith affairs at the American Jewish Committee (AJC), merely mentioning the word Pharisaic “does not make somebody an anti-Semite,” but “it is definitely a component of anti-Semitism.”

People should “put it in context, or at least use ‘those Pharisees’ or ‘those Jews,’” he told AFP.

“We’ve raised the issue” with the pope, he said, adding: “I don’t think he will use things in quite the same cavalier manner.”

When the Jews kvetch, the Pope listens, to paraphrase an old E.F. Hutton commercial.

Could this have anything to do with the fact that the most powerful Order in the Church — the Jesuits — was founded by a Jew and throughout its history has heavily recruited Jews?

Stephen Wise, former Chief Rabbi of the U.S.A., made it clear that today’s Judaism is directly descended from the “religion” of the Pharisees, who called for the death of Christ.

And the Jews continue to call for the death of Christ by their ongoing campaign to gut the Christian faith of any unflattering reference to them.

Of course, the “leaven of the Pharisees” is hypocrisy, which means the Jews will not be required to remove the countless disparaging references to both Christ himself and the “Gentiles” or “goyim” in their “holy” Talmud.

It would seem that the Jews believe that the depiction of the treacherous Jews in the New Testament contributes to the “rise” in “antisemitism” today, and that jewish behavior has nothing to do with it.

Because Christ was an “antisemite”, he repeatedly rebuked the Jews for no reason whatsoever.  The Pharisees were just innocently putting faithful Christians to death, and they should not be criticized for that.

Under today’s jewish Noahide Laws, acknowledged by every U.S. President since George Bush Sr., all Christians are considered “idolators” who deserve death unless they renounce their faith.

This is where the Judas Goat Pope is leading his unsuspecting flock: to the gallows.