Jewish residents of the New Hampshire town of Laconia are in a tizzy — demanding the resignation of a Republican state legislator who inadvertantly posted a link to an article that appeared on a website whose webmaster is an internationally-wanted Jewish “Neo-Nazi” who goes by the name ‘Weev’:

Newly-elected state representative Dawn Johnson shared a Dec. 7 post from the “Daily Stormer” — a website run by an American Hitler-worshiper, Andrew Anglin, that is named in honor of the Nazi gutter newspaper “Der Sturmer.”

At the foot of the piece was a cartoon showing the Republican governor of Georgia, Brian Kemp, standing next to a crudely-drawn stereotype of an elderly Jewish man carrying a sign that announced “rent hike effective immediately.” The caricature was accompanied by the caption, “Riggers, Jews…Bad News.”

Johnson, who also serves on the Laconia School Board, later expressed regret for sharing an article from a neo-Nazi outlet. “I have removed the report as it came from a source I do not agree with and thanks to a couple of people who showed me,” she wrote on her Facebook page.

However, Johnson has firmly rejected calls for her resignation from both the New Hampshire legislature and the local school board.

On Monday, both Rabbi Dan Danson of Temple B’nai Israel in Laconia and Laconia School Board Chairperson Heather Lounsbury told The Laconia Daily Sun that local residents had “swamped” them with emails and messages over the weekend demanding that Johnson resign.

Danson expressed concern that Johnson’s reference to the “Daily Stormer” as a “source I do not agree with” suggested she did not properly grasp the outlet’s toxic nature.

“An important element of this is it names what the problem is,” Danson told The Laconia Daily Sun. “The source (of Johnson’s post) is the most virulent, prominent, antisemitic website in the country.”

Danson said he would accept Johnson’s word that her post was inadvertent, but emphasized, “the gravity of that impact, having a state representative essentially sending out a message that says American Jews are in a conspiracy to destroy democracy — it’s just a very upsetting and disturbing thing to be seen.”

School Board chair Lounsbury said that the majority of messages she received condemned Johnson.

“Most emails that I have gotten and, from what I’ve heard most of the voice mails, do express great displeasure with quotes she made and majority of them are asking for her resignation from the board,” Lounsbury noted.

New Hampshire politicians also weighed in on the controversy, with Republican Governor Chris Sununu issuing a statement denouncing “antisemitism and racism in all its forms.”

“These comments are repugnant and appalling,” he added.

Some local leaders also rose to Johnson’s defense. One of her fellow Republican legislators, Gregg Hough, claimed that Johnson was the victim of “a hack job designed to destroy somebody who absolutely did nothing wrong.”

This article, of course, fails to mention that for years The Daily Stormer been run by a Jew named Andrew Auerenheimer, aka ‘Weev’ — who takes great satisfaction in mercilessly trolling his fellow Jews.

‘Weev’ himself has admitted that he’s related to the grandfather of Zionism — Theodor Herzl — and we all know what Herzl stated about so-called ‘antisemites’:

The anti-Semites will become our most dependable friends, the anti-Semitic countries our allies. (from The Complete Diaries of Theodor Herzl. Vol. 1, edited by Raphael Patai, translated by Harry Zohn, page 83-84)

These distraught Jews in New Hampshire appear to be completely ignorant of the game that is being played on them by their own leaders, again as Theodor Herzl explained,

But “not all Jews” are ignorant of the importance that “antisemitism” plays in their plans for world domination.

And this explains why the vast majority of these widely reported stories of antisemitic hate crimes are hoaxes — and that Jews themselves are often behind them — because they know how much they benefit from them.

In other words, Jews have incentivized antisemitism — and they have especially incentivized their fellow Jews to grossly exaggerate the “problem” in order to get what they ultimately want — to make criticism of Jews a capital crime.

Antisemitism is big business — or as one prominent Jew described it — it’s “money in the bank” — which explains why a Jewish supremacist group like the Anti-Defamation League has over $90 Million in assets — the more antisemitism they trumpet, the more money flows into their bulging coffers.

We shouldn’t be surprised that Jewry wants to neutralize — or even imprison — anyone who opposes them — whether its JFK or just a blogger with a small following — they will use their enormous, over-reaching power to ensure that everyone fears them — even their fellow Jews.

They got a taste of what it’s like to have unopposed and unaccountable power in Bolshevik Russia — where they could summarily execute anyone who even muttered the word “Jew” under their breath — and that’s exactly the kind of power they want again. 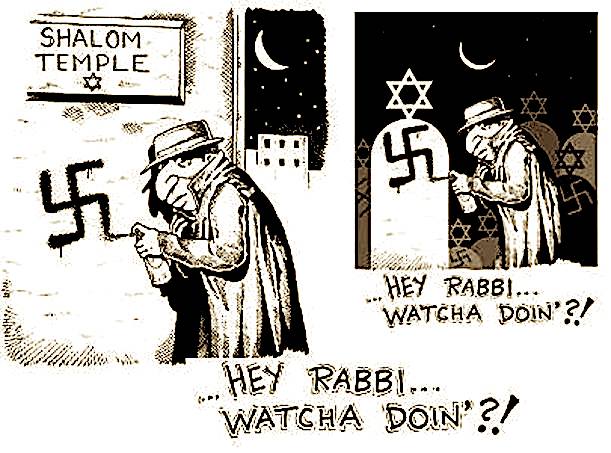