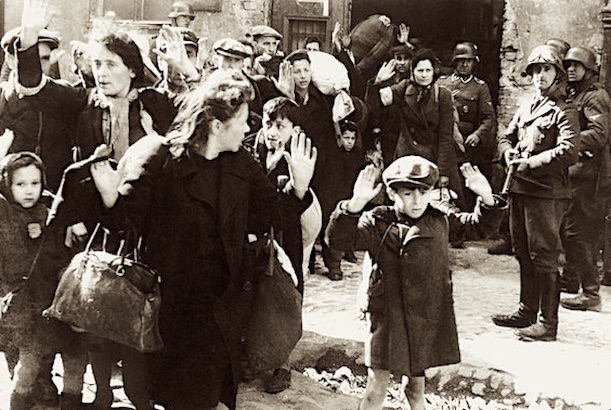 (Algemeiner) As part of their ongoing effort to demonize the Catholic Church and hold it — and Christians in general — responsible for the so-called Holocaust™, Jewish researchers now believe they’ve discovered a document that proves antisemitism™ among high-level Catholics provided the impetus for the Vatican to dismiss reports of an alleged German ‘massacre’ in the Warsaw Jewish Ghetto:

A document unveiled by German researchers at The Vatican’s newly-opened archive of documents relating to wartime Pope Pius XII indicates that the pontiff misled US officials who were seeking information on the massacres of Jews in Eastern Europe by the Nazi regime.

“This is a key document that has been kept hidden from us because it is clearly antisemitic and shows why Pius XII did not speak out against the Holocaust,” Hubert Wolf — a Catholic priest who headed the German team — told the Catholic weekly Kirche + Leben.

The Vatican archive, opened in March 2020, is expected to cast greater light on the vexed question of whether Pius — who never spoke out publicly against the Holocaust — was “Hitler’s pope,” as one historian dubbed him, or whether his public caution was part of a strategy to protect Jews in hiding.

According to an extensive report by Religion News Service, the implications of the newly-discovered document “do not look good for Pius or the Catholic Church. The details are a bit complicated, but Wolf’s conclusions are quite clear.”

The RNS article went on to explain that the “chain of events goes back to September 27, 1942, when a US diplomat gave the Vatican a secret report on the mass murder of Jews from the Warsaw Ghetto. It said about 100,000 had been massacred in and around Warsaw and added that another 50,000 were killed in Lviv in German-occupied Ukraine.”

“The report was based on information from the Geneva office of the Jewish Agency for Palestine. Washington wanted to know if the Vatican, which received information from Catholics around the world, could confirm this from its own sources. If it could, would the Vatican have any ideas about how to rally public opinion against these crimes?

The archive included a note confirming that Pius read the American report. It also had two letters to the Vatican independently corroborating the reports of massacres in Warsaw and Lviv, according to the researchers.

A month before the American request, the Ukrainian Greek Catholic archbishop of Lviv, Andrey Sheptytsky, had sent Pius a letter that spoke of 200,000 Jews massacred in Ukraine under the ‘outright diabolical’ German occupation.

In mid-September, an Italian businessman named Malvezzi told Mgr. Giovanni Battista Montini, the future Pope Paul VI, of the ‘incredible butchery’ of Jews he had seen during a recent visit to Warsaw. Montini reported this to his superior, the Vatican’s secretary of state (prime minister), Cardinal Luigi Maglione.

But the Vatican told Washington it could not confirm the Jewish Agency report.

The basis for this was a memo by another staffer at the Secretariat of State, Fr. Angelo Dell’Acqua, who later became a cardinal. In that memo, he warned against believing the Jewish report because Jews ‘easily exaggerate’ and ‘Orientals’ — the reference is to Archbishop Sheptytsky — ‘are really not an example of honesty.’

That memo is in the archive but was not included in the 11-volume series of wartime documents the Vatican published to defend Pius’ reputation.”

Jews themselves make jokes about the stereotypical Jewish proclivity toward exaggeration, especially about their own ‘suffering’, along with their chronic dissatisfaction about everything, but those jokes, for hypocritical reasons, are not considered ‘antisemitic’.

Independent historical research indisputably shows that the initial reports that 50,000 Jews were murdered by the Germans during the Warsaw Ghetto Uprising were grossly exaggerated.

Because of the ongoing Soviet air bombardment of Warsaw, the Germans decided to clear the Jewish ghetto and relocate the Jews to a safer location in Lublin.

But prior to that clearing action — and no Jewish historian will ever admit this — the Germans helped the Jews build cement air raid shelters in the Warsaw Ghetto to protect them from the Soviet air raids!

During that mostly peaceful house-to-house clearing of the ghetto, some armed Jews engaged the Germans and were killed — perhaps 20 or so.

The much-repeated figure of 50,000 Jewish ‘murders’ is actually the number of Jews who were apprehended and relocated by the Germans.

These historical facts reveal the reason the Catholic Church was unable to corroborate the unreliable reports they received concerning a ‘massacre’ in the Warsaw Ghetto.

These facts also reveal how Jews, indeed, are prone to gross exaggeration of their own victimhood and suffering.

And the Poles, who tolerated the largest population of Jews in all of Europe, knew better than any other Europeans about the infamous Jewish proclivity to lie and exaggerate:

“The Jew cries out in pain as he strikes you.”  –Polish Proverb