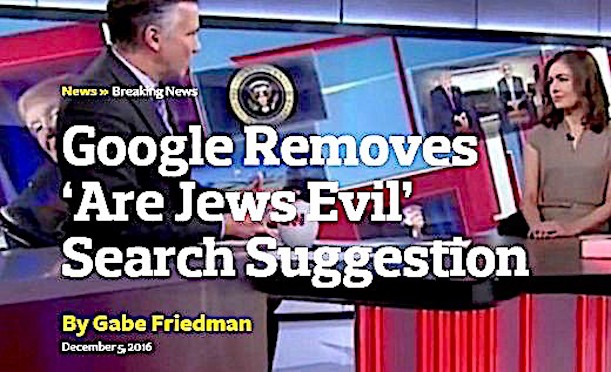 A self-serving report by the jewish New York Times writer Seth Stephens-Davidowitz claims that about 170,000 Google searches with “antisemitic content” are made every year in the UK – around ten percent of which involve violent language or intentions:

Using Google search data from 2004 to 2018, the report by the CST and Antisemitism Policy Trust also showed that Britain ranks third in the world for searches about “Zionism”, behind only Israel and Lebanon – 29 percent higher than in the US.

Searches for the word in the UK rose 25-fold in April 2016, after Ken Livingstone made comments about “Hitler supporting Zionism”. “Hitler Zionism” is the fourth most popular search about Zionism in Britain.

The report also identified specific days or times when the volume of antisemitic searches rose sharply.

There was a 79 percent rise in antisemitic Google searches in April 2018, most of which occurred on the day after Jewish community representatives met Labour leader Jeremy Corbyn.

In another example, each year, on Holocaust Memorial Day (January 27), searches for “Holocaust hoax” are roughly 30 percent above average.

And in the days following Israel’s victory in the 2018 Eurovision Song Contest, antisemitic searches increased by 30 percent.

The report was written by Seth Stephens-Davidowitz, the New York Times best-selling author of Everybody Lies: What the Internet Can Tell Us About Who We Really Are.

It showed that in the UK, there are more Google searches into the Rothschild banking family than for top Jewish celebrities such as David Baddiel or Tracy-Ann Oberman.

Most of these searches are looking for conspiracy theories related to the Rothschild domination of the world.

The greatest fear of the Jews is that the sleeping goyim are going to wake up and realize the true extent to which the Jews not only have subverted and destroyed our White Christian countries, but also the extent to which they have close to an iron-clad control over them too.

And even though Google is a jewish-controlled company — and its search results are programmed to cast the Jews in the most positive light — they still have not perfected a way to completely censor the results that reveal the cold hard truth about jewish power.

Stephens-Davidowitz, the Jew who wrote this “study,” is typical of Jews who pretend to be “one of us” but are really only interested in pushing the jewish nation-wrecking agenda.

No, “everybody” doesn’t lie — or at least lie the ways that Jews lie.

As the great German philosopher, Arthur Schopenhauer, once observed, the Jews are the “Masters of the Great Lie.”

White people generally confine their lying to small, rather innocuous lies of convenience, Jews lie on a massive scale — so large that White people simply cannot conceive of lies so grand, such as 9-11, the Holocaust, the JFK assassination, the attack on the USS Liberty, and even the Jewish claim that they are the Israelites wrote the Old Testament.