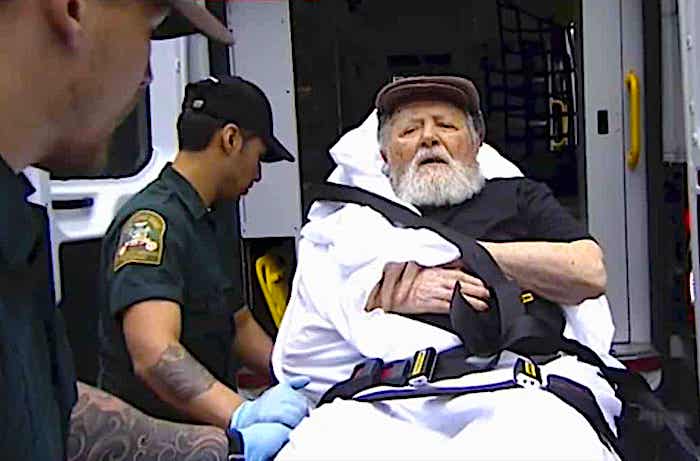 Jakiw Palij, a frail 95 year old man living in Queens, whom Jews claim is the last surviving Nazi “war criminal” in the U.S. is finally being deported to potentially face trial in Germany:

On a quiet block in Queens, America’s last known second world war Nazi lived in a modest red-brick home alongside others in an outer borough of New York City– and didn’t make waves.

Neighbors described Jakiw Palij, 95, as an elderly man who kept to himself and would not have stood out – except for the protesters who often flocked to his front door to demand his expulsion from the country.

Palij was finally deported to Germany early on Tuesday morning – capping a more than decade-long fight led by New York officials and residents disgusted to learn they had a former Nazi concentration camp guard in their midst.

“It’s finally happened. This is the last Nazi. You can close the book on this chapter,” said state assemblyman Dov Hikind, who helped lead several protests outside Palij’s home, and visited on Tuesday morning for what he said would be the last time.

The one-time concentration camp guard made his home in Jackson Heights, a highly diverse neighborhood of the city borough of Queens, with a large population of immigrants from Latin America, South Asia and elsewhere, as well as a sizable LGBT community.

Palij is accused of having lied to gain entry to the US almost 70 years ago, claiming he was a Polish farmer. Almost 20 years ago the US authorities determined that he had been a member of the SS, the elite corps of the Nazi party, and had worked at the Trawniki concentration camp in Nazi-occupied Poland. The camp trained soldiers to round up Jews for extermination.

Angel Naranjo, 49, who lives next door, said he would occasionally say hello to the neighbor whom he sometimes saw gardening outside his apartment, until a year ago when his health deteriorated.

The older man seemed nice enough, Naranjo said, but he believes it is right for Palij to pay for his crimes – though the deportation should have happened years ago.

…David Weprin, a New York state assemblyman representing Queens, said it was a particular affront to have Palij living in “probably one of the most diverse communities in the United States”, referring to Jackson Heights.

“It was a terrible feeling,” he said outside the now-empty home. “It’s a relief to us, to Queens, to New York City, to the country that this Nazi is no longer living freely in Queens.”

None of the allegations against Palij have been proven, but when it comes to the Holocaust, the threshold for proof and evidence was set very low starting at the Nuremberg “Trials”.  Mere accusations in and of themselves are often considered iron-clad proof.  Why hasn’t there been a trial here in the U.S. to decide if, in fact, Palij did anything illegal during WWII?  Need we ask?

After all, millions of people have lied on their citizenship applications, and very few of them after 65 years are deported, unless they turn out to be “Nazis”.  Virtually every citizenship application made by Mexicans, Arabs, and Africans contains obvious lies, but they won’t be deported.  Only alleged Nazis — especially frail 90 year old Nazis — can be deported without trial.

When was the last time a former Soviet war criminal was deported from the U.S.?  That will never happen because many of those war criminals are Jews, and Jews are perpetual victims, never victimizers.  And anyone who disagrees with that take on history is an anti-semite.