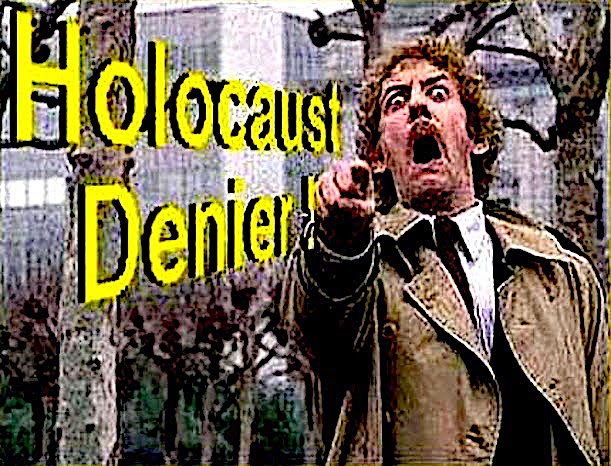 The Jewish News Syndicate has published another essay demonstrating the incorrigible Jewish hypocrisy and narcissism over free speech — they applaud the recent Facebook censorship of “Holocaust deniers” based solely on the spurious presumption that anyone who wants to know the full truth about what did and did not happen in World War II must necessarily be motivated solely by an irrational, blind hatred of Jews:

…The Internet is the best thing that ever happened to extremists. Prior to its development, denizens of the fever swamps of the far-right and the far-left were limited in their ability to communicate with each other or to publicize their beliefs.

Marginal groups were effectively silenced in an era when print, radio and television outlets were closed to them because major publishing entities acted as gatekeepers that effectively shut them out of the public square. While the Internet opened up new opportunities for communication for every conceivable niche and interest group, and thereby democratized publishing, it also provided a way for hate groups to connect and gave them a megaphone with which to make their toxic messages better known.

That was enabled because Facebook and Twitter were allowed by an obscure legal provision to avoid accountability for what they allowed to be published on their sites. Section 230 of the 1996 Communications Decency Act allowed an “interactive computer service” to be exempt from the normal perils of publishing—i.e., being held accountable for what was put on their sites. This both protected free speech on the Internet and allowed those responsible for what were thought of as bulletin boards for users, rather than publishing outlets to function without tackling the impossible task of monitoring what their customers were doing. Although the development of social media was far in the future at that point, Section 230 was the law that enabled Facebook and Twitter to eventually dominate modern communications.

In the view of those who are concerned about the spread of hate, that was all well and good when it was just a matter of providing billions of people the ability to post pictures and updates about their lives. Eventually, however, the notion of Zuckerberg, whose current wealth is estimated at $111 billion, enriching himself by enabling Holocaust deniers was seen as intolerable. They felt the same way about Twitter founder Jack Dorsey, who is only worth a piddling $4.9 billion…

Of course the original 1996 Communications Decency Act had less to do with “freedom of speech” on the internet per se — it was about protecting children from all the freely available Jewish-produced pornography that was beginning flood into every home in America.

But let’s not forget that it was Jews who have always defended the proliferation of pornography as a form of “free speech” — a complete twisting of the intent of the First Amendment.

And the Section 230 clause that was added to the CDA was a common sense law that made ISPs legally immune for what user’s posted on their websites — without that indemnity, the internet would collapse.

But Section 230 took away the Jews’ go-to tool to silence voices they didn’t like — sue the publisher — make the publication of certain opinions a prohibitive economic liability — the terrible power of the Jewish purse.

They are demanding their “right” to censor content that offends them –and pedophilia doesn’t offend them but your opinion probably does.

Oh, they are all for “freedom of speech” and “democracy” as long as they own all the publishing houses and television stations — and “count all the votes.”

To do that end, they need to effectively de-claw Section 230 — and by doing so, they can regain their pre-internet monopoly as the sole “gatekeepers” of all opinions and information– and they are doing just that.