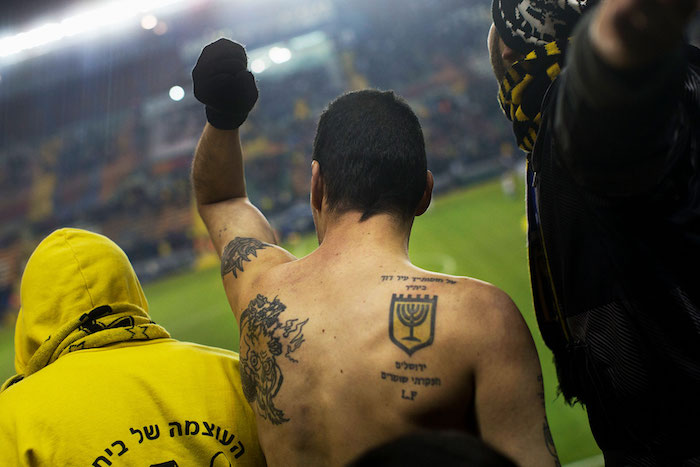 “Forever Pure,” an Israeli film about the racist fans of an exclusively jewish soccer team in Israel, has received an Emmy award for Best Documentary about Government and Politics:

An Israeli documentary film about racism among fans of a controversial soccer team won an Emmy Award on Monday night in the Outstanding Politics & Government Documentary category.

“Forever Pure” is a film by Israeli documentary director Maya Zinstein that was broadcast by the Independent Lens show on the US television network PBS.

Its subject is the Beitar Jerusalem soccer club, known for its far-right hooligan fans and anti-Arab chants, and for being the only team in Israel’s Premier League that has never signed an Arab Muslim player.

The film chronicles the 2013 signing of two Muslim players — Chechnyan, not Arab — by then-owner Arkady Gaydamak, and the outrage it caused among the powerful racist fan group La Familia, which began a campaign against the move and forced the team to hire bodyguards to protect them.

The club’s offices were also the target of an arson attack blamed on the racist extremists that destroyed all their trophies, including their six national championship cups.

The racist campaign persisted, focusing on the club’s coach at the time, Eli Cohen, and chairman Itzik Kornfein. The two players, Zaur Sadayev and Dzhabrail Kadiyev, were eventually kicked off the team.

Beitar, which has since been sold to Eli Tabib and again recently to entrepreneur Moshe Hogeg, has been trying to change its image in recent years. Last year it received an award from President Reuven Rivlin for its efforts to tackle racism and for significantly reducing the number of racist chants.

Hogeg said recently that religion would no longer be used as a criterion for signing players, suggesting Arabs may be joining the former Israeli champion team. The fans’ reaction to such a development is yet to be tested.

Jews love to bestow awards and prizes upon each other to show the rest of the world how talented they all are compared to the rest of us. Virtually every award that you’ve ever heard of is voted on by committees dominated by Jews.

This film deserved an award because it created sympathy for racist Israelis who wanted to keep their bloodline “pure” — which is ironic considering that every Jew is already mixed-race to begin with.  But the film teaches us not to judge “racist” Jews too harshly — after all, if it weren’t for the Holocaust, they wouldn’t have to behave like White racists.