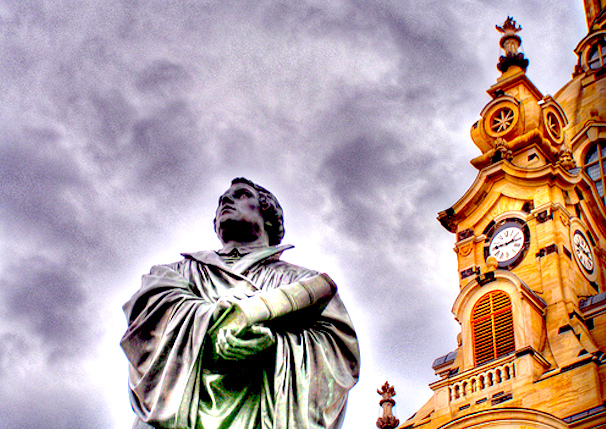 Dymocks, an Australian bookstore chain with 60 shops across the country, has been selling an unflattering book about Jews by Martin Luther — a book that Jews claim was allegedly used by “some Nazis” to justify the so-called “Holocaust”, according to a press release by the Anti-Defamation Commission.

The controversial book “[On] The Jews and their Lies,” written by the German anti-Catholic reformer Martin Luther in 1543, contains numerous passages which describe Jews as “bloodthirsty,” and even calls for their slaying.

The Nazis reprinted the book in 1935 and used it during their rallies.

The edition sold by Dymocks includes a foreword written by Texe Marrs, an American antisemitic pastor who was known for expressing radical antisemitic ideas.  Marrs used to refer to Jews as the “enemy,” and to call their religion “false” and “bloodthirsty.”

Luther uses obscene language to describe the Jewish people in his book, referring to them as “poisonous envenomed worms” who spread lies.

“The notorious antisemitic tract by a rabid and violent Jew-hater, which called for the murder of rabbis, and promoted a program of extermination served as a blueprint for Hitler’s Final Solution,” Chairman of the ADC, Dr Dvir Abramovich said, adding: “It should not be sold by any bookstore.”

During the Nuremberg trial in 1946, Julius Streicher, Hitler’s chief Reich propagandist, tried using Luther’s book as a part of his defense to justify the Nazi Genocide.

Dvir Abramovich, a “poisonous envenomed worm,” as Luther would describe him, is at it again — complaining about ‘antisemitism’ in such a way that always creates more antisemitism — almost as if that’s his real agenda.

Apparently, Jews also take umbrage at being referred to as “termites” — any creepy crawly thing.

But thanks to this new complaint about an obscure book published in the 16th century, thousands of new readers will seek out this book just to see what all the fuss is about — and they will find that everything Martin Luther said about the Jews was completely rational and evidence-based.

What this article conveniently leaves out is that for most of his life Martin Luther was very supportive of the Jews until a Jewish acquaintance warned him of what was written in the Talmud about Jesus Christ and Christians — it was only then that Luther became an unapologetic ‘antisemite’.

In 2018, a personal letter by Luther was auctioned off, in which he made reference to some of the vile Jewish vitriol he learned directly from the Talmud:

For these Jews are not Jews, but devils incarnate who curse our Lord, who abuse His mother as a whore and Him as Hebel Vorik and a bastard, this is known for certain… You may show this letter to whomever you wish.

In other words — Abramovich has no one to blame but himself the next time some “swastikas” magically appear somewhere in Australia.

If it weren’t for neurotic, paranoid Jews like Abramovich, Australians wouldn’t have a clue about how the Jews are subverting and destroying their nation.

And as usual Abramovich doesn’t dispute any of Luther’s claims about Jews — because he can’t — which leaves him no other recourse but to impotently call Luther ‘mean’ names and demand that his ‘offensive’ words be censored.