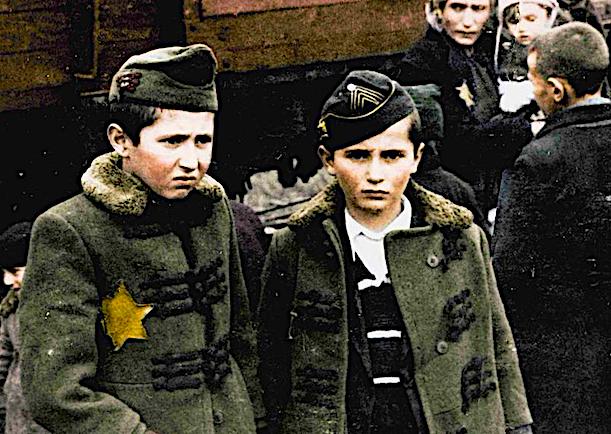 As part of a concerted effort to combat an astonishing lack of interest in the Holocaust among young people, jewish producers have colorized the original black and white footage of Nazi concentration camps for the first time for a new documentary akin to Sir Peter Jackson’s acclaimed First World War retrospective They Shall Not Grow Old:

Auschwitz Untold in Colour, a two-part series, will feature testimony from 16 survivors of the camps to bring “contemporary resonance” to the horrors of the Holocaust, producers Fulwell73 said.

The Ben Kingsley-narrated documentaries air on More 4 this month, to mark the 75th anniversary of the liberation of Auschwitz on January 27.

The colourisation technique used on the archive footage is similar to that used in Sir Peter’s They Shall Not Grow Old, which was released in 2018.

It is thought to be the first time that monochrome footage from inside the Nazi camps has been colourised for a television documentary.

Fulwell73’s Sheldon Lazarus, development producer of Auschwitz Untold In Colour, said: “The 16 survivors who feature in this series tell their extraordinary accounts of survival and resistance against all odds in their own voices, and accompanied by remarkable colourised footage from the archives, we hope this series will help remove a barrier that separates contemporary audiences from the reality of the Holocaust so that we never ever forget the atrocities of the past.

“With the 75th anniversary to commemorate the liberation of Auschwitz in 2020 we felt it was really timely and important to bring to life the untold stories of the Holocaust in a new way.”

David Shulman, the series’ producer and director, said: “My ambition in making Auschwitz Untold in Colour was to have as much contemporary resonance as possible.

“The colourisation of black and white archive is one aspect of making this history more accessible to a younger audience and giving greater humanity to the people seen in the footage.”

And, no, simply colorizing dreary old film footage from the work camps is not going to make the fantastic jewish version of events any more believable or persuasive to media-savvy young people.

Thanks to the internet, Jews no longer have an absolute stranglehold on all materials produced about the so-called Holocaust, and in the last 20 years hundreds of well-researched and documented films and scholarly books have been produced that responsibly question many aspects of the self-serving Jewish-sanctioned version of World War II.

And because of that, skepticism about what really happened in the concentration camps is at an all-time high and growing daily, despite their ongoing efforts to make any questioning of the Holocaust a jailable offense worldwide.

Even many credible, high-profile Jews have begun to openly question the veracity of the ‘official’ Holocaust narrative.

Jews themselves are enslaved and terrorized by the lies surrounding what allegedly happened to them in WWII, and that enslavement to a massive lie causes them to want to go to extreme lengths, like gutting our constitutional rights, to make sure another fake Holocaust doesn’t happen again.