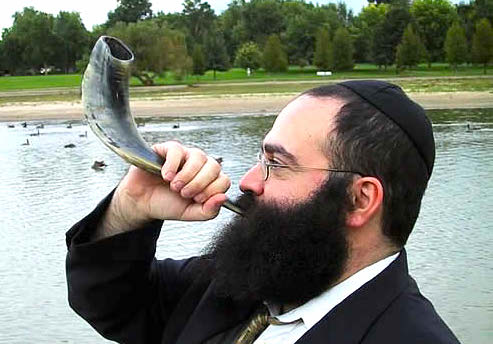 More than 350 people gathered for a rally against antisemitism and “hate” in Peabody, a city on Boston’s North Shore, after motorists allegedly shouted antisemitic “slurs” at two Chabad rabbis out walking on Shabbat:

Wednesday’s rally was called by Mayor Ted Bettencourt to support Rabbi Nechemia Schusterman of Chabad of Peabody and Rabbi Sruli Baron of Tobin Bridge Chabad in Chelsea, a city just outside of Boston.

The two friends were out on a walk on Saturday, May 25, when a group of about three or four pickup trucks slowed alongside them, Schusterman reported to the Peabody police. The driver of the lead truck shouted an anti-Semitic obscenity and hurled a penny out of his window, yelling “something to the effect of ‘go pick up the penny [expletive] Jew,” Schusterman reported.

The rabbi later wrote about it publicly on his Facebook page and in “Yes, I look Jewish: Hate on Lowell Street,” a front page essay published last week in the North Shore’s Jewish Journal.

“Walking and chatting and visibly Jewish – kippas, beards and tzitzits flying about – was apparently too much for a bunch of pickup truck drivers,” he wrote.

The reported incident follows three cases of suspected arson earlier in May at two Boston-area Chabad centers that are also the homes to their rabbis and their families.  The acts of arson are under investigation by state and federal authorities.

Last week, a staff member of the Jewish Community Relations Committee of Greater Boston was called a “kike” while he was walking in Cambridge, the group’s executive director, Jeremy Burton, wrote in a June 4 twitter post.

The large turnout in Peabody “sent a powerful message that acts of hate would not be tolerated,” Mayor Bettencourt said, according to the Salem News.

So in other words, these two rabbis admitted that they didn’t quite hear exactly what these “attackers” yelled at them, but they assumed it was an “antisemitic obscenity” (whatever that is) because they were dressed like Jews.  Of course, their story included the crucial detail that their “attackers” drove not one, but four pick-ups, just to make sure we all understand that these evil “Jew haters” were cartoonish White rednecks.  And the question we all have is: did the rabbis pick up the penny that was allegedly thrown at them as “evidence” to show the police, or did they keep it for themselves?

But before we all panic about this “pogrom” in Boston, we need to keep in mind that Jews have been caught countless times staging fake hate crimes and making fake police reports.  Should the testimony of these men be trusted merely because they are rabbis?  After all, their holy book, The Talmud, clearly states that it’s perfectly acceptable for Jews to lie about non-Jews, especially if it promotes jewish interests, and characterizing the “goyim” as irrational, pick-up truck driving, cartoonish antisemites does, in fact, help the jewish agenda, which is “hate crime” legislation that will make these types of “terrifying” incidents punishable by jail, or better yet, death.