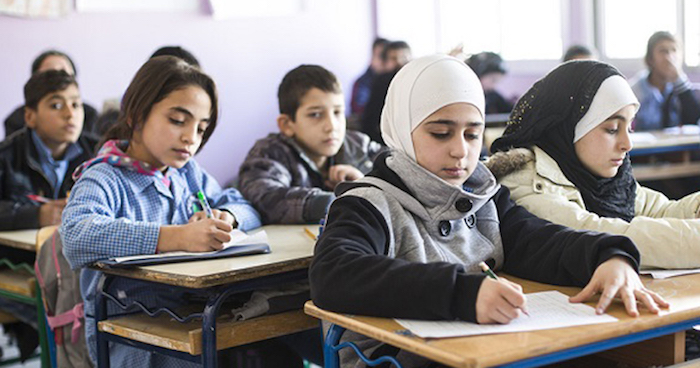 Jews love to see Europe flooded with Muslims, but they don’t like the antisemitism that the Muslims naturally bring with them, so the Jews in Germany are demanding that these new immigrants be forced to undergo classes in antisemitism:

The country’s federation of Jews has suggested tailoring extra integration classes for migrants, who may still be influenced by their home countries’ anti-Jewish sentiments.

Official figures released this summer show that the number of hate crimes committed against Jews in Germany increased by more than 10 percent. While the majority of the crimes were committed by Neo-Nazi groups, in some cases the attackers were Muslim migrants.

Though the migrant flow is not pouring into Europe with the force of previous years, Vice President of Germany’s Central Council of Jews Abraham Lehrer believes that the “problem of immigrant Arab-Islamic anti-Semitism” still lies ahead. He was speaking days before the grim 80th anniversary of Kristallnacht – the Night of Broken Glass which marked the start of the violent assault on Jews by the Nazis.

According to Lehrer, many asylum seekers who arrive in his country are mainly influenced “by regimes” where anti-Semitism is “a part of [their] rationale” and where “the Jewish state is denied the right to existence.”

As soon as the quest for job and housing is over for these people, they may re-experience this influence from their home countries and “will express their opinions openly,” he says. “In order to prevent this scenario, we need to tailor integration courses more closely to these people, preferably by country of origin.”

Lehrer suggested organizing additional hours in integration classes in which “fundamental values” such as democracy and treatment of women in European society “are intensively taught.”

In one of the most resonating cases a 19-year-old Syrian migrant used a belt to beat an Israeli wearing a kippa. The attacker, who was convicted of assault and grievous bodily harm, insisted that he just wanted to scare his victim.

Earlier this year a shocked father revealed to German media that his daughter was told she deserved to be beaten and killed when she admitted to a Muslim student that she did not believe in Allah.

Concerns about anti-Semitism from Muslim immigrants in Germany were earlier raised by Charlotte Knobloch, the President of the Jewish Community of Munich and Upper Bavaria. “Anti-Semitism has grown on the right and the left, in the Muslim community and also in the heart of German society,” Knobloch contended back in 2017.

Antisemitism exists because Jews exist, and as long as there are Jews in Europe, there will be antisemtism in Europe.

Muslims come from antisemitic countries because Israel has been bombing and subverting their countries for decades — but we can’t expect Israel to change its behavior — that would be antisemitic.

We can, though, demand that Muslims, if they want a free lunch and Soros-funded debit cards in Europe, take classes to learn how not to be antisemitic.

But given how the Palestinians have reacted to being ethnically cleansed by the Israelis, it’s doubtful that any of these Muslim migrants will stop disliking Jews.

The Jews have basically imported the Arab-Israeli conflict into Europe in order to undermine and destroy it, and if a certain number of Jews have to experience some “antisemitism” along the way to paradise, then so be it.

The EU has made antisemitism illegal, but apparently those laws aren’t dissuading any Muslims from expressing their distaste for Jews.

If the laws don’t work, why would these classes in antisemitism work?  Perhaps the Jews themselves should be forced to take classes in why their behavior creates antisemitism.