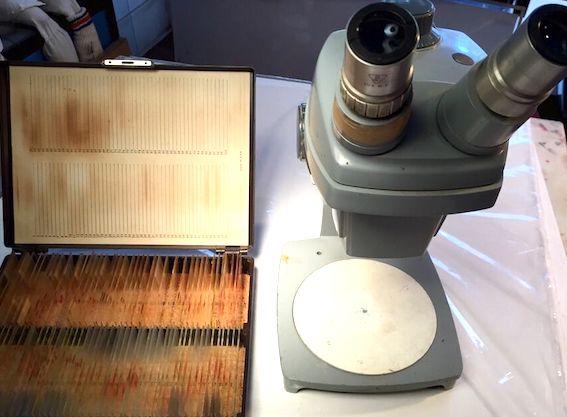 (Times of Israel) Seventy years after the end of World War II, more than 300 tiny pieces of human tissue from alleged “political prisoners” allegedly executed by the Nazis were finally buried Monday at a Berlin cemetery:

The samples — each a hundredth of a millimeter thin and about a square centimeter in size — were uncovered on microscopic glass plates by the descendants of the Third Reich anatomy professor Hermann Stieve.

Stieve dissected and researched the bodies of inmates killed at the Berlin Ploetzensee jail, including those of executed resistance fighters — in part to examine the physical impact of fear experienced by women.

“With the burial of the microscopic specimens… we want to take a step toward giving the victims back their dignity,” said Karl Max Einhaeupl, head of Berlin’s university hospital Charite.

Descendants of the victims attended a multi-religious ceremony, before the remains were finally laid to rest at Berlin’s Dorotheenstadt cemetery.

The burial site had been picked as there are many graves and memorials for Nazi victims there, said Johannes Tuchel, director of the German Resistance Memorial Center, which organised the event with Charite.

Tuchel said the human tissue samples were among “the last remains of people who were victims of the Nazis’ unjust justice system … They were denied a grave at that time, and so today, a burial is a matter of course.”

“Now I know where I can mourn my mother, because she was executed on May 13, 1943, and we always went to Ploetzensee (to mourn her). But that’s not really a good place to remember her, at least not for my soul. I’m now glad I can come here,” said the 81-year-old.

Notice that there is zero direct evidence that these specimens came from jewish “victims” of the so-called Nazis.

The Jews, of course, didn’t run any DNA analysis on the “remains” because the results probably would not be consistent with their ongoing agenda to use any excuse whatsoever to run yet another story on so-called “atrocities” committed by the “Jew-hating” Germans.

Who besides mental patients bury anonymous glass slides which “might” contain body tissue from Jews who probably weren’t even killed by the Germans during the war?

It has been well documented by a number of mainstream jewish historians, and even Goebbels himself, that tens of thousands of Jews were allowed to live untouched and openly in Berlin throughout the war.

They weren’t “rounded up” and thrown in “gas chambers” just for being Jews.

How is this possible if what the Jews tell us about the Nazis is true?

And no doubt many of the Jews who lived openly in Berlin got arrested for petty crimes and ended up in a Berlin jail, but does that make them victims of the Shoah?

Sure, if you’re a Jew who is still desperate to prove that this Grimms fairytale they concocted really was true.