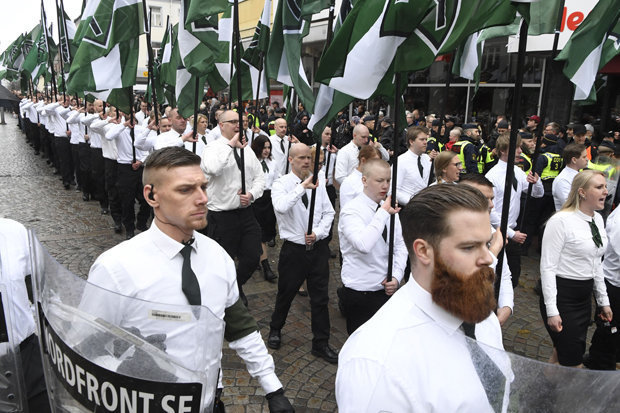 Jews have been working hard to turn a once vibrant White Sweden into a multicultural cesspool, and now they are demanding that anyone who opposes their grim vision for the country must be silenced:

Leaders and prominent members of the Jewish community in Sweden have renewed calls to ban the neo-Nazi Nordic Resistance Movement, following the latest of several demonstrations by the party in recent months.

Approximately 300 far-right activists participated in a demonstration held by the NRM on Saturday morning, designed to attract attention to the party in the lead-up to Sweden’s general election scheduled for September 9.

Saturday’s rally follows a demonstration it staged in July during an annual political conference, and a rally held in September last year in Gothenberg.

Despite advocating policies restricting citizenship to “Nordic” people, “repatriating” immigrants who are not of Nordic ancestry, and working “to regain power from the global Zionist elite,” the NRM has not been banned.

Jewish Community in Stockholm President Aron Verstandig said neo-Nazi activity in Sweden has been on the rise “for some time,” and described NRM as “an openly violent” party which should be outlawed.

“I see it as extremely troubling that we have a rising neo-Nazi movement in Sweden, and the politicians should do whatever they can to ban these organizations,” said Verstandig.

“The government hasn’t done enough to limit this group and legislation needs to be passed” to proscribe the party, he said.

Verstandig said the Jewish community had felt “very intimidated” by Saturday’s march, even though the demonstration was not directed specifically against Jews.

The Jews should feel intimidated–for years they have gotten far too comfortable promoting their cultural Marxism on Sweden with virtually no opposition. The harder they push their agenda, the bigger the push-back will eventually be–and if they know their own history, they should know what’s coming if they don’t back off.

Contrary to what the “fearful” Jews would have us believe, the resistance groups in Sweden are not so-called “Neo-Nazi”, and they have no intent or interest in gassing another 6 billion Jews. They simply want their country back, and they want to determine their future without the subversive interference from Jews and their liberal lackeys.

Jews love to trumpet “democracy” – but only as long as none of those democratic voices are pro-White and pro-Christian.