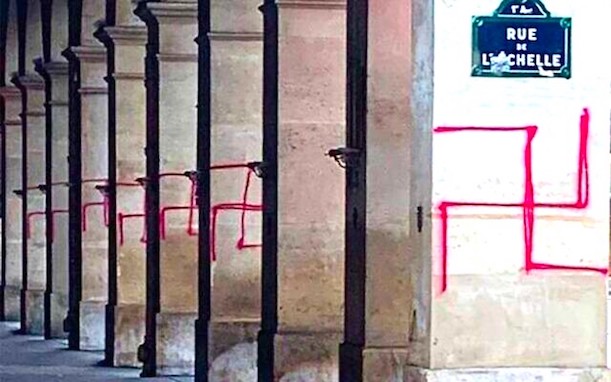 French Jews continued to react furiously on Thursday to the announcement from the Paris public prosecutor’s office that ‘antisemitic provocation’ was not among the charges facing a man who allegedly sprayed series of large red swastikas along the French capital’s landmark Rue de Rivoli last weekend:

In a post on Twitter, CRIF — the representative body of French Jews — declared its “total incomprehension” at the prosecutors’ decision.

“How can you spray 20 swastikas without being prosecuted for antisemitism?” CRIF asked.

The offender in the case — a 31-year-old man from the Republic of Georgia — will be remanded in police custody until his trial begins.

But while he faces charges of causing damage to property, the prosecutor’s office insisted that there was no legal basis for a crime aggravated by religious or racial hatred.

The prosecutor’s reasoning was based on the observation that the swastikas were daubed on the columns of a building with no historic Jewish associations, and therefore “the damage was committed without specifically targeting buildings identified as being linked to the Jewish community.”

Meanwhile, a lawyer in the case representing LICRA — a leading civic organization combating antisemitism and racism in France — declared herself “stupefied” by the decision.

The decision not to include antisemitism among the charges was also a “great moment of indignation and anger,” lawyer Dorothée Bissacia-Bernstein tweeted, adding: “To be continued.”

Yes, the Jewish threat — “to be continued” — meaning, “It’s not over until the Jews say it’s over.”

Pathologically narcissistic Jews act as if they literally own the meaning not only of the swastika, but everything associated with World War II, and especially “Nazi” Germany.

The swastika was apparently part of the plunder of the war that the Jews grabbed, along with hundreds of thousands of German patents and other property — and they see swastikas everywhere — even hidden in hot cross buns.

It becomes literally international news when a Jew sees a swastika anywhere — and reports it to the “authorities” — even when they themselves are the ones drawing them — which happens often.

No one except Jews have the right to determine the meaning of a swastika or the context in which it is used — because swastikas are always about Jews — no other meaning is possible in their obsessive-compulsive estimation of the world.

And because of the Jewish obsession over swastikas and “Nazis”, the general public has come to believe that the swastika is a generic symbol of “evil” or “totalitarianism” — and it’s the fault of the Jews that it’s become that.

Just like the so-called “Holocaust” itself — because of Jewish obsession about it — and overplaying it — the public now think of it as a generic “evil” event.

Of course, the actual meaning of the swastika pre-dates the Holocaust by thousands of years — and it is a symbol of the Aryan race and God “Yahweh” — the God they pretend to worship when they aren’t worshiping Molech, aka “Hashem”.