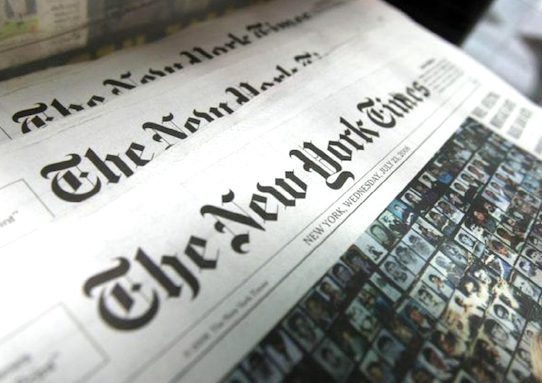 (The Algemeiner) A front-page New York Times–ProPublica article headlined “A Leading Jewish Philanthropist Is Accused of Sexual Harassment,” is triggering complaints from Jews nervous that the story will stoke even more antisemitism in the general public:

One objection is that that the Times was wrong to emphasize the religion of the philanthropist, Michael Steinhardt.

“Am I the only one who thinks ‘Jewish’ in the headline is superfluous information? What is that doing there? The NY Times would be unlikely to say an ‘African-American’ or ‘Baptist’ philanthropist was accused…” wrote one commenter on the Times website.

Another commenter wrote, “I am also deeply disturbed by the headline. Would the New York Times write a headline describing someone as a Christian philanthropist, or a white male? At a time of growing and frightening antisemitism, what is the purpose of this headline? Was its inflammatory nature considered? His alleged victims were Jewish women, but that’s not headlined. And the article makes it clear that he did not limit his donations to Jewish organizations. As a loyal reader of the Times, I am very disappointed.”

Another Times commenter wrote, “Isn’t the story about sexual harassment? Why is his religious affiliation part of the headline?”

Yet another wrote, “headline identification is an example of the persistent NYT insensitivity to its Jewish readers. Are we now headline-identifying alleged perpetrators by religion?”

And another wrote, “Why did the Times feel the need to identify Michael Steinhardt as ‘Jewish’ in the headline? Would you have used Protestant, Catholic Evangelical, or other religious identifier on another individual? Why not just say ‘A Leading Philanthropist’? …Your sticking the label Jewish on Mr. Steinhardt only exacerbates the rising anti-semitism that is occurring in this country.”

In a statement, the Steinhardt family and foundations criticized the Times article. “The innuendo and purposeful distortions are clearly designed to harm Michael and mislead readers,” the statement said.

Jews have worked feverishly for years trying to convince the goyim that there is no connection between biology, race and behavior.  Remember, goy, it’s all just a “social construct” and has no real-world significance.  We are all born “blank slates” and can be molded into the same generic “citizens” if only exposed to the right education and socialization in school.  Regardless of what race or family we are born into, we all have the identical potential for good and evil, or so the jewish fable goes.

And this story provides a perfect illustration of how Jews play the racial shell game, claiming to be a “religion” when it serves them, and then claiming to be an ethnic minority when that benefits them.  They want their cake and eat it too, but when they demand that both identities are true, they inevitably run into contradictions and hypocrisy, which doesn’t seem to bother very many Jews.  It’s the ultimate irony and hypocrisy that Jews are offended when even other Jews point out that someone is jewish, but their source of pride is also their source of collective shame, as an astute social commentator once pointed out:

“The Jew is immunized against all dangers: one may call him a scoundrel, parasite, swindler, profiteer, it all runs off him like water off a raincoat. But call him a Jew and you will be astonished at how he recoils, how injured he is, how he suddenly shrinks back: “I’ve been found out.”