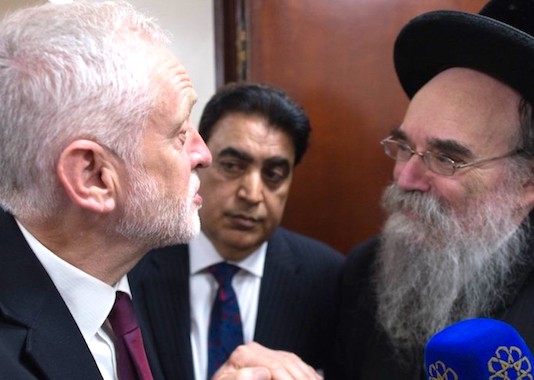 In the latest antisemitic witch hunt, UK Labour leader Jeremy Corbyn was found Tuesday to have authored a glowing foreword to a book that claims that Jews control global financial systems and describes them as “men of a single and peculiar race”:

As uncovered by the UK’s Times newspaper, Corbyn in 2011 endorsed a new edition of the 1902 book “Imperialism: A Study,” by JA Hobson, a British economist who, according to historian William Rubinstein, is known for his “vocal anti-Semitism” both personally and in his writing.

In the book, Hobson describes the global and financial system as controlled by people “united by the strongest bonds of organisation, always in closest and quickest touch with one as other, situated in the very heart of the business capital of every state, controlled, so far as Europe is concerned, by men of a single and peculiar race, who have behind them many centuries of financial experience, they are in a unique position to control the policy of nations.”

As if to drive home the point, the author asks: “Does anyone seriously suppose that a great war could be undertaken by any European State, or a great State loan subscribed, if the house of Rothschild and its connections set their face against it?”

Corbyn’s foreword, which describes the work as a “great tome” and praises Hobson’s “brilliant, and very controversial at the time” analysis of global politics, was written four years before he was elected leader of the Labor party.

Responding to the Times report, a Labour party spokesperson denied that Corbyn supported Hobson’s anti-Semitic views and said his praise was of the overall political analysis.

Jeremy Corbyn is jewish, so why isn’t he offended to find out that his fellow Jews, like the Rothschilds, Schiffs, and Warburgs, have consolidated control of the world’s financial systems, which they themselves created?  The Jews of Hollywood made a movie in 1934, prior to World War II, called “The House of Rothschild” which clearly shows how the Jews gained control over all of Europe’s banks and aristocracies.  But because the movie portrays this jewish banking monopoly as “good”, it’s not considered antisemitic.  Benjamin Ginsberg, a professor at Princeton University, freely admits to this jewish power in his book, “The Fatal Embrace” (1993).

And predictably, this article attempts to mock the idea that the Rothschilds are so powerful that they can and do decide whether or not countries will go to war, but the grand matriarch of the Rothschild dynasty, Gutle Rothschild (1753 – 1849) once bragged, “If my sons did not want wars, there would be none.”  The overwhelming evidence that jewish interests dominate banking is not a “conspiracy theory” but rather an indisputable fact of which many Jews have expressed ethnic pride, and it is the height of absurdity for apologists to deny it.

The multi-part documentary “Europa: The Last Battle” will erase all doubts you may have of this being an “antisemitic canard”: