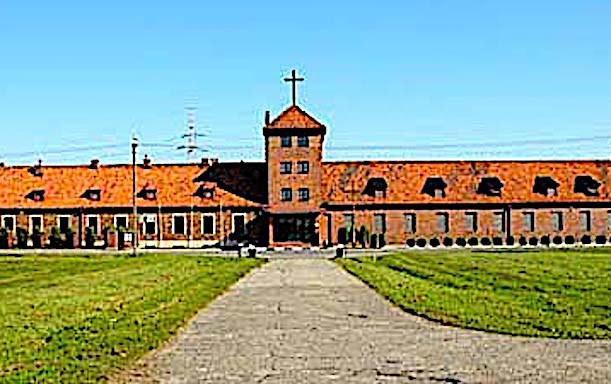 It’s not enough for the Jews to have virtually all Christian symbols removed from the grounds of the Auschwitz concentration camp, now they want a cross on a nearby church removed, too, even though it is not on actual camp property:

[Four] rabbis from the United States stood in front of a church located in the nearby former SS headquarters to protest what they called a “desecration” of the site where 1.1 million Jews were murdered between 1941 and 1945.

Their leader, Rabbi Avi Weiss, 75, has been protesting the placement of the church near Auschwitz-Birkenau for decades. He was arrested for demonstrating there in 1995. Weiss is also known for protesting against the establishment of a Carmelite convent in a former Auschwitz building where the Zyklon-B gas used to murder Jews was once stored. The nuns eventually left the building in 1993 on orders from Pope John Paul II…

“We’re here to protest the existence of this church in this location,” said Seligsohn. “This building had previously been an SS headquarters during the Holocaust. There were accounts of women being raped and abused here in this building. And in the 1980s it was turned into a church. We think this is a tremendous violation.”

Visitors exiting the former Birkenau extermination camp walk hundreds of yards (meters) past the camp’s ruins — isolated columns and piles of bricks jutting out of bare earth, cordoned off by lengths of jet black barbed wire. On the horizon, the church looms with its unmistakable Nazi architecture behind a towering crucifix.

The church stands just across the quiet, one-lane road that marks the former camp’s boundary. It is nearly spitting distance from the edge of the barbed wire. Behind the church is a tranquil residential neighborhood with small, tidy homes that smell of wood fireplaces…

“The only thing that’s going to be left after 50 years is these huge crosses on top of this church. People are going to think this is a Catholic site of destruction. It’s the biggest Jewish cemetery in the world,” [said Seligsohn].

…The enormous crucifix in the church’s front yard was also considered offensive even by those unaware that it was the scene of the rabbis’ demonstration.

“Coming down that road, where the sign tells me that Jewish children were marched to their deaths in crematoria four and five, then making a right out of the camp and the first thing I see is a large cross was jarring, and quite honestly, offensive,” said Andrew Silow-Carroll, editor in chief of The Jewish Week, who paid a personal visit to the site the day after the rabbis’ protest.

“I don’t begrudge them their church or their religious fellowship,” Silow-Carroll said. “But I don’t think the large cross needs to be there, looming over the camp walls in a way that stakes a claim.”

“We’re not looking for the church to close, we’re looking for it to move. Because if it remains, this is the only thing that’s going to be left in Auschwitz-Birkenau,” Weiss said. “Interfaith relations are very important to me, but a church doesn’t belong here. There comes a certain point where you have to stand up for Jewish dignity and speak up for those who can’t speak for themselves.”

Jews hate Christianity, and the symbol of the cross elicits the same response from many Jews as it does from vampires, a cringing revulsion.

Clearly, the neurotic Jews equate the cross with “Nazis”, so much so that they have successfully lobbied the jewish leader of the Church of England to admit that Christianity itself ‘contributed’ to the Holocaust.

And Jews could care less if anyone sees their Star of David as a symbol of pure evil, genocide and jewish supremacy.  Anyone who thinks that, especially the 60 million dead Russian Christians they murdered under communism, is an ‘antisemite’.

But the Jews are correct about one thing here: after they and their imaginary Holocaust are long gone, the Christian Cross will indeed still be standing.