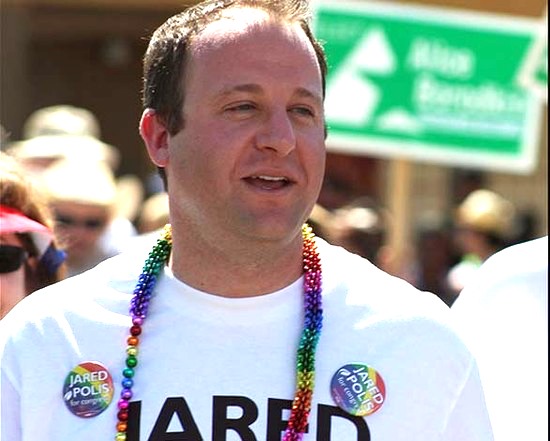 Jews are openly celebrating the election of Colorado’s first jewish gay governor, along with the election of other radical jews in key positions of power in the Colorado State government:

As Democrats swept to power in Colorado this fall, many national headlines focused on Jared Polis becoming America’s first openly gay governor as a point of increased diversity in the Centennial State. Joe Neguse’s election as Colorado’s first African-American congressman drew other such headlines.

But what traveled under the radar was the fact that several prominent Jewish candidates, including Polis, Griswold and Attorney General Phil Weiser, are the first Jews elected to constitutional statewide offices in Colorado’s history. Along with Democratic Senator Michael Bennet and Representative Ed Perlmutter, many leaders of the Colorado Democratic Party are of the Jewish faith or some mix of religions, as was the case with Bennet, who was raised in a Christian and Jewish household.

The rise of Jewish politicians in Colorado could be seen by some as a coincidence, but there are strong ties between the actions of Donald Trump’s administration and a perceived violation of Jewish values and history that are prompting more Jews to seek political office.

For one thing, successful Jewish candidates have been mostly Democrats. And it’s not just the trifecta at the top of the Democratic ticket in Colorado; high-level figures, from statewide Democratic Party Chairwoman Morgan Carroll to Communications Director Eric Walker, along with a laundry list of behind-the-scenes Democratic operatives and state representatives, are also Jewish, an impressive feat for a relatively small religious minority. Approximately 102,000 Coloradans are Jewish, according to a 2017 estimate from the Jewish Virtual Library, or about 2.5 percent of Colorado’s population — slightly above the national average of 2.1 percent.

“Judaism is a religion composed of nomadic people with a history of persecution and being a minority culture among a majority. It puts a high degree of importance on caring for those that are oppressed, dejected, or in need,” says Rabbi Mark Goodman, who practiced in the Denver area for seven years before recently moving to Pennsylvania. “Jewish practice and thought care deeply about rigorous intellectual exploration. Judaism is a religion that puts a huge premium on carrying out justice methodically, fairly, and with consistency.

“The current president of the United States is the polar opposite and the anathema of everything I just listed above.”

Along with left-leaning ideology, Jews also value community, much like Vermont Senator Bernie Sanders, a self-described socialist who is also Jewish (and who remains a visible and popular figure in Colorado).

“Jews as a people, as a culture, are extremely communal,” says JoyAnn Ruscha, a Jewish Democratic political operative. “Naturally, if you grow up in a culture where you are taught to feed the stranger, that public education is valued, that health care is a human right, that you are literally responsible for your brother, then it’s not inconceivable that as you get older and you become voting age, that you are going to vote for the party that says we lift each other as we rise.”

Immigration is a particularly sensitive subject for many Jews, and it’s a topic that many Jewish candidates touched on when asked during debates about the ties between their faith and their decisions to run for office. During the Holocaust, asylum-seeking Jews were turned away from most non-European countries — including the United States — and were often forced to return to Europe, where many eventually met their death in concentration camps. Many of the U.S.’s current asylum policies were born from that dark episode in our history.

Weiser’s mother, Estare, was born in the Buchenwald concentration camp just one day before American troops liberated it in April 1945.

So, in other words, if the Jews don’t take over the Colorado State government, there could be “another” Holocaust, or something along those lines.  If the citizens of Colorado don’t allow powerful Jews to flood their state with Third World invaders, White supremacists in Colorado might start rounding up Jews again and put them in work camps, or something like that.  It is remarkable how Jews are able to make the so-called Holocaust relevant to Colorado state elections — convincing the White liberals that if they don’t oppose Trump’s agenda, they might start throwing jewish babies in gas chambers.

But when Jews brag that they are taking control of the State of Colorado, we are expected to see it as a good thing, but if we think it’s not good for Colorado to be run by a jewish sodomite, we are called “antisemites” and “White supremacists”.  If we think that an openly gay governor is a bad role model for our children, we are smeared as “homophobes”.  And that’s really their only way of defending their stranglehold on Colorado politics — if you don’t like it, you’re a antisemitic White supremacist homophobe.  That’s their only defense, and sadly this strategy is working.