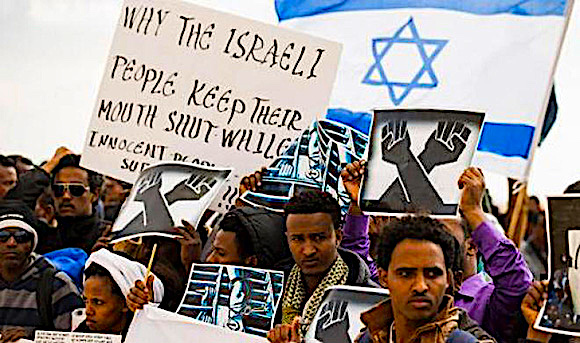 Many jewish supremacists in Israel are up in arms today after a new Supreme Court ruling could potentially open the country to mass immigration by unwanted African migrants claiming refugee status, say Israeli immigration officials:

According to a report Monday by Galei Tzahal, officials in the Interior Ministry’s Administration of Border Crossings, Population and Immigration have expressed concern over a Supreme Court ruling handed down Sunday, which some fear could set a major precedent, potentially forcing Israel to recognize thousands of illegal immigrants as refugees – and possibly enable future migrants claiming refugee status to enter the country.

In its ruling Sunday, the Supreme Court ordered the State to grant refugee status to a couple and their two daughters, citing fears that relatives of the family could try to force the couple to perform female circumcision on their daughters.

Recognizing concerns over female circumcision, or female genital mutilation (FGM) as it is commonly referred to, as a basis for demanding refugee status in Israel could potentially enable mass immigration to Israel, Interior Ministry officials fear, from across Africa and the Middle East, where the practice is common.

According to the United Nations, more than 200 million women have undergone some kind of FGM procedure, and is most common in Africa – in particular the Horn of Africa – and parts of the Middle East, though it is also practiced in some Muslim communities in southeast Asia.

Tens of thousands of illegal immigrants from areas where FGM is common – including Somalia, Eritrea, and Sudan – currently live in Israel, after illegally crossing the border in the 2000s and early 2010s, prior to the construction of the border fence.

Immigration officials fear, according to the Galei Tzahal report, that the court’s ruling Sunday could cause a dramatic increase in the number of refugees in Israel.

Since the establishment of the state in 1948, Israel has granted refugee status to less than 200 migrants, with less than 1% of migrants seeking recognition as refugees securing that status.

The Israelis need not worry — if Africans ever attempted to storm the borders of Israel as they have Europe or the U.S. border with Mexico, the Israel Defense Force soldiers would open fire and cut them down with extreme prejudice — as they should.

If Israeli Jews are forced to live in the kind of multicultural society that they promote in all White nations, there would no doubt be ‘another’ Holocaust because Jews would lose their jewish identity through inter-marriage and race mixing, exactly what they plan for the White race in our own countries.

While it would be wonderful to see the Jews in Israel get a taste of their own ‘diversity’ medicine, it’s highly unlikely they’ll ever let that happen — nor should they.

If Jews can have their racially homogeneous country, we should be allowed to have ours, too, but of course the Jews can never let that happen again because the last time we tried that, the Jews were politely asked to leave, and those that wouldn’t leave voluntarily had to be forcefully ‘uprooted’.

And the Jews were so traumatized by being forced out of our White Christian countries that they experienced a hysterical mass psychosis where they actually believed that we, the entire White European race, conspired to put them in ‘gas chambers’ disguised as showers and murdered and cremated 6 million of them, without a trace, not even one single gold filling.

All because we just wanted countries of our own to live as we wished.

This is what Israel does with these African “infiltrators”.  They traffic them ultimately to Europe: